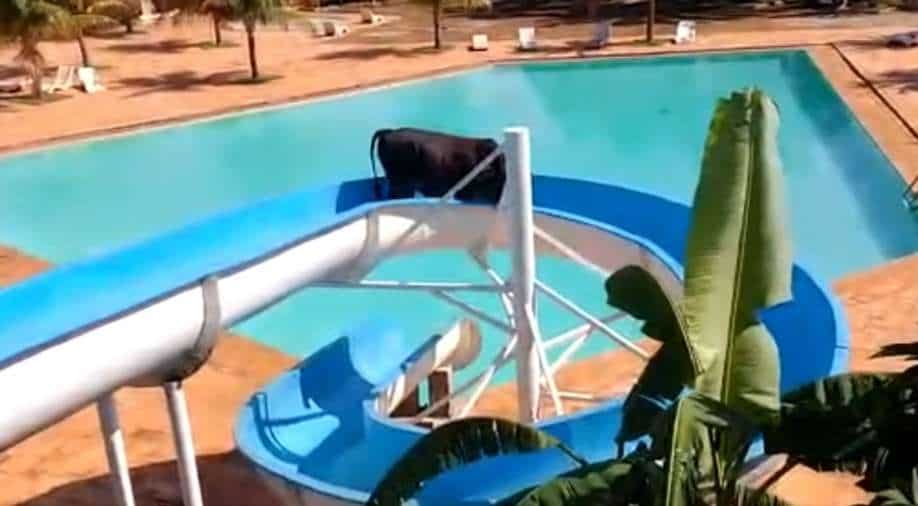 The 700-pound bovine was held at the slaughterhouse in Nova Granada, located around 800 kilometres west of Rio de Janeiro. A family now has adopted the cow as a pet

A cow’s escape from a slaughterhouse in Brazil is winning hearts across the globe after a video of the bovine enjoying a water slide at a nearby waterpark went viral on social media.

The 700-pound bovine was held at the slaughterhouse in Nova Granada, located around 800 kilometres west of Rio de Janeiro.

After the cow made the daring escape, it made its way to the neighbouring Indaia Club de Campo, where the animal ended up climbing to the top of a water slide at the pool, according to a report by the New York Post.

Surprisingly, the slide is only supposed to hold 450 pounds and managed to carry the enormous weight of the animal.

Notably, the waterpark wasn’t allowing too many visitors at that time, as the bovine was seen sliding without any hesitation.

The video has since become viral, with many naming the cow ‘Tobogã’, which means ‘slide’ in Portuguese.

Also, the cow now won’t be consigned to the slaughterhouse anymore, as it has been adopted as a pet by a farmer, according to reports.

“I looked to see if he had any injuries, but he's fine. He'll stay here because of the people. The people want to know where he is. He's been the attraction. Everyone wants to know. We want to take him to the club,” said Carlos Miguel Serante, told news outlet G1.