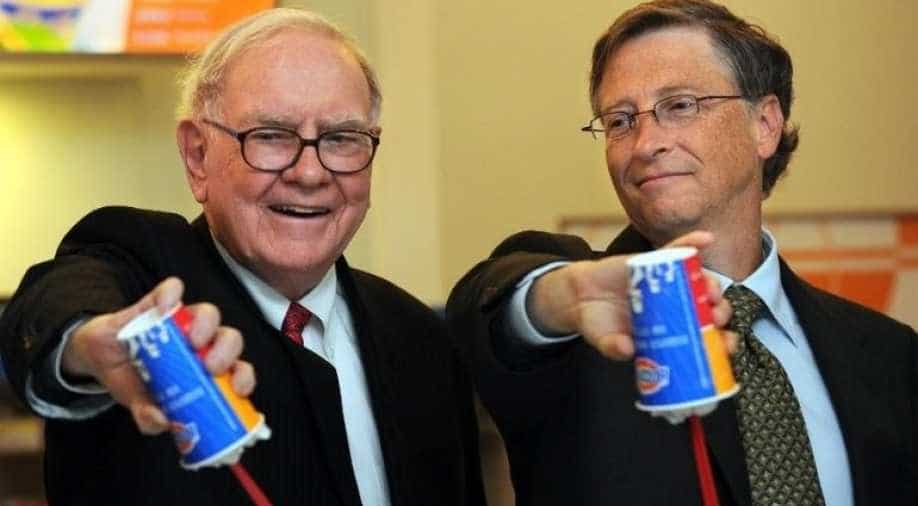 US billionaire investor Warren Buffett (L) and Microsoft founder Bill Gates (R) flip over their Dairy Queen Blizzard treats, the most successful product ever released in the history of Dairy Queen, a US desert chain with over 300 stores in China, at the o Photograph:( AFP )

A man of many talents, turns out one of the world’s richest men can also bake, and very well actually.

A man of many talents, turns out one of the world’s richest men can also bake, and very well actually.

To honour his friend Warren Buffett on his 90th birthday, Gates made a cake from scratch. And the best part of it all? He documented it all for us to see.

Buffett is an American investor and known as one of the world’s most prolific investors.

Gates had wonderful things to say about Buffett, and said that the investor has the mental sharpness of a 30-year-old.

Watch the full clip below

“Warren Buffett turns 90 years old today. It’s hard to believe that my close friend is entering his tenth decade. Warren has the mental sharpness of a 30-year-old, the mischievous laugh of a 10-year-old, and the diet of a 6-year-old. He once told me that he looked at the data and discovered that first-graders have the best actuarial odds, so he decided to eat like one. He was only half-joking”, he wrote.

Writing further in his blog, Gates reminisced on the good times with his buddy. “Warren is still so youthful that it’s easy to forget he was once an actual young man, just starting out in his career”, Gates further wrote, while sharing an old photo of Buffett with his family.

Gates dug a little deeper and created a listicle of sorts to sum up Buffett’s 90 years of existence. He claimed that Buffett has received 30 years of sleep by now, based on the assumption that he gets 8 hours of sleep every day.

“One of Warren’s most admirable qualities is his unshakable sense of right and wrong. It’s a trait he may have gotten from his dad, Howard, a stockbroker and three-term US Representative from Omaha”, Gates went on to say.

Gates ended the letter on a sweet note, quite literally. “A person that I admire as well as like—that's the perfect description of how I feel about Warren. Happy birthday, my friend”, he wrote.