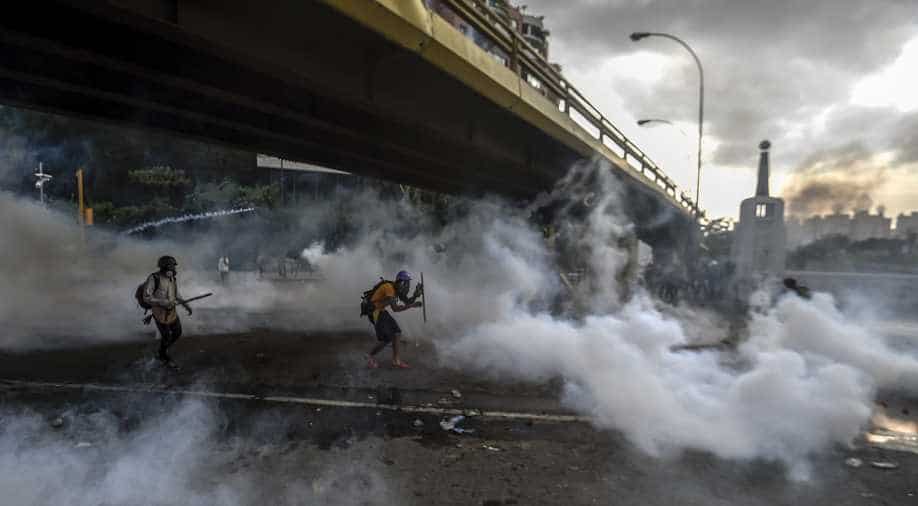 Demonstrators clashed with Venezuelan police again Saturday as they descended on the offices of the state media regulator, the latest in nearly two months of often-violent protests demanding the ouster of President Nicolas Maduro.

Youth with their faces covered blocked the main motorway running through Caracas, cutting it off with trucks that they then set on fire. They also erected barricades of rubble.

Police fired tear gas to disperse the rally, and demonstrators fought back by hurling Molotov cocktails and stones.

Demonstrations that kicked off in late March have claimed the lives of 58 people, as opposition leaders seek to ramp up pressure on Venezuela's leftist president, whose already-low popularity has cratered amid shortages of food and medicines, among other economic woes.

Saturday's protest in Caracas was held to mark 10 years since the government shuttered a popular television station.

The network, RCTV, was shut down by Maduro's predecessor, the late populist leader Hugo Chavez, after more than a half-century on the air, for its outspoken criticism of his government.

The move "was an atrocious act against freedom of expression," Julio Borges, leader of the opposition-led legislature, said at the protest.

At the time, officials said the move to close RCTV aimed to "democratize" the airwaves in Venezuela.

Since its demise, a state television broadcaster, TVES, was founded and has been operating in its stead.

The government also ordered the Spanish version of CNN off the air in February, accusing it of broadcasting "war propaganda."

"You never find out about anything. We have to get information from Facebook and social media on the internet, through international TV channels," said Matilde Quintero, a retiree marching through Caracas wearing a cap with the yellow, blue and red colors of the national flag.

In a speech, Maduro praised staff at TVES, saying "for 10 years they have been broadcasting humanist television."

Maduro also stood by his plan to elect a constituent assembly to rewrite the constitution and do so without input from opposition parties. Opposition leaders call this a ploy to avoid early elections and cling to power.

On Friday, riot police greeted throngs of protesters who rallied at a complex of buildings housing the defense ministry in Caracas.

Demonstrators had hoped to sway the support of the armed forces against Maduro, who has been resisting opposition calls for early elections.