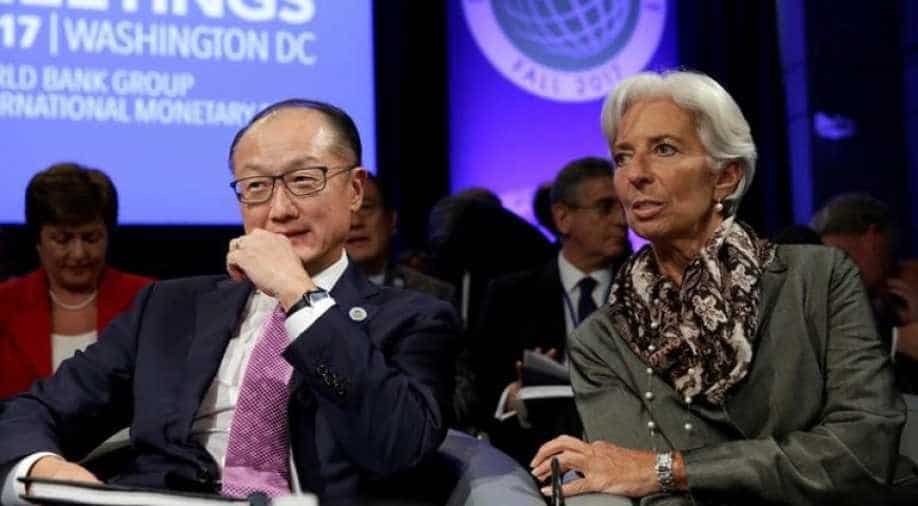 The growing split between the United States and the rest of the world spilled into the annual meetings of the International Monetary Fund and World Bank in Washington this week.

The US administration showed a diminished view of the Bretton Woods institutions that shaped a US-led order after World War II, rejecting efforts to expand their activities, and defending its attack on free-trade pacts as part of President Donald Trump's "America First" agenda.

And at the same time, the US continued to stymie China's ambitions to elevate its global role via an expanded stake in both the IMF and World Bank.

US Treasury Secretary Steve Mnuchin took aim at the IMF and World Bank bureaucracies, calling them inefficient and suggesting their staffs are overpaid -- a longstanding view among many US conservative critics of both

The Trump administration spelled out its view by rejecting a capital increase that the World Bank wants to expand its global anti-poverty mission.

"More capital is not the solution when existing capital is not allocated effectively," Treasury Secretary Steven Mnuchin said in a statement Friday, one day after Bank President Jim Yong Kim said he believed the Trump administration was now supportive of the move.

There was also no movement on the IMF's long-planned boost in its lending resources that would come with a shakeup of its shareholder quotas. Last year, the Republican-controlled Congress effectively vetoed the move, and the Trump administration has not supported bringing it back to life.

US questions IMF, Bank pay
Instead, Mnuchin took aim at the IMF and World Bank bureaucracies, calling them inefficient and suggesting their staffs are overpaid -- a longstanding view among many US conservative critics of both.

"We see scope for further budget discipline, especially with respect to compensation and the Executive Board budget," he said of the World Bank.

The new US stance on globalization under the Trump administration also came through in the meeting of the G20 finance ministers and central bank chiefs that took place during the IMF-World Bank meetings.

In the past, the group regularly raised the alarm over protectionist and anti-free-trade sentiment.

But this week the Trump administration -- which this year killed the Trans-Pacific Partnership with Asia-Pacific nations, stalled talks on a transatlantic free trade zone, and forced a renegotiation of the North American Free Trade Agreement -- appeared to stifle such talk.

After presenting a tepid G20 statement with no mention of trade or protectionism, German Finance Minister Wolfgang Schaeuble quipped that the G20 lacks expertise in the matter. Because of that, he said, "at this time, global discussions are much more relaxed."

Schaeuble challenges US
The US differences with its allies were not evident on the surface, and the nearly week-long meetings of the two giant multilateral institutions went off smoothly.

The World Bank's Kim and IMF chief Christine Lagarde kept the focus on the need for countries to reform for the long term while global growth is strong, and to address growing inequality, especially in the most developed nations.

But in statements to the steering committees of the two institutions, many countries made clear their differences with the United States.

Most said they backed a capital hike for the World Bank. Schaeuble called it "urgent."

He also was tough on the trade issue.

"We should all be concerned about slow global trade growth and increased anti-free-trade rhetoric. Both are a threat to our common economic prosperity," Schaeuble said.

"Protectionist measures will only harm growth and harm those they claim to protect," he added.

In its formal statement, China called the lack of progress on increasing World Bank capital "regrettable."

'Climate change' restored
It is a crucial issue for Beijing, which sees that a larger shareholding in both the IMF and World Bank, both dominated by the United States, would recognize its status as the world's number two economy and a political superpower.

"We hope that all parties will provide more political impetus from the perspective of increasing the legitimacy and effectiveness of the World Bank's governance structure... so as to increase the representation and voice of emerging market and developing countries," China said.

The US push for both to curb compensation met unenthusiastic reactions. In a closing statement, the Bank's steering committee blandly pledged support for a compensation review.

But the IMF bristled. "The Fund is highly cost-conscious and in fact we have been operating under a flat budget in real terms for six years in a row," a spokesperson said. "Salaries and benefits are reviewed on a regular basis by our Executive Board."

But one notable change suggested the Trump administration was not always getting its way -- or was changing its stance.

In the April IMF-World Bank meetings, the final Bank statement was bereft of any mention of climate change, reflecting Trump's refusal to accept it as a key global challenge.

In the statement released Saturday, climate change was reinstated as one of the world's key challenges.