US Secretary of State Antony Blinken meets with WHO chief, supports probe into Covid origins 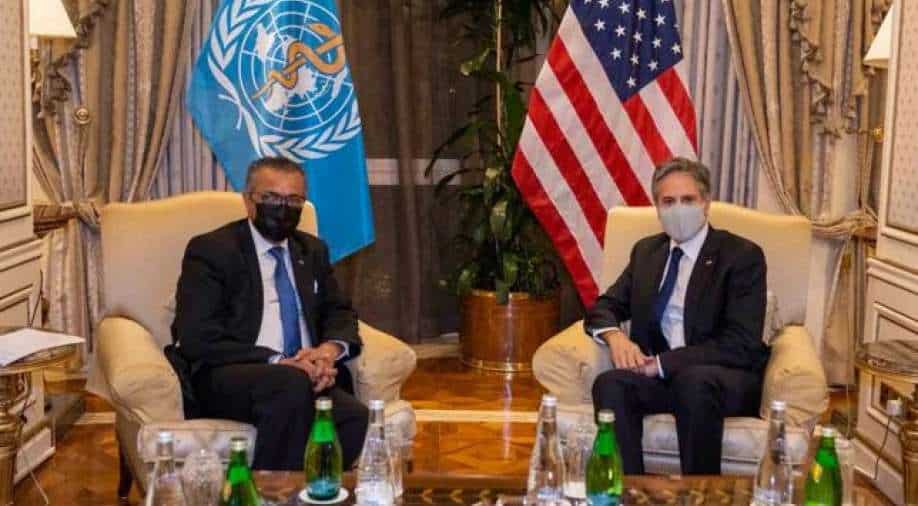 "The US supports the @WHO plans for additional studies into COVID-19 origins, including in (the People's Republic of China), to better understand this pandemic and prevent future ones," Blinken tweeted.

US Secretary of State Antony Blinken met with the head of the World Health Organization, Tedros Adhanom Ghebreyesus, in Kuwait on Wednesday, where he pledged his support for the UN agency's investigation in China into the origins of the coronavirus pandemic.

"The US supports the @WHO plans for additional studies into COVID-19 origins, including in (the People's Republic of China), to better understand this pandemic and prevent future ones," Blinken tweeted after arriving in the Gulf Arab state.

Also read | US recorded highest new COVID-19 cases worldwide in past week: WHO

The meeting with Tedros had not been on the US diplomat's published schedule.

In a statement, State Department spokesman Ned Price said that Blinken "stressed the need for the next phase (of the investigation) to be timely, evidence-based, transparent, expert-led, and free from interference."

And he "emphasized the importance of the international community coming together on this matter of critical concern".

In a meeting with DG Tedros, we discussed saving lives by ending this pandemic and advancing global health security. The U.S. supports the @WHO plans for additional studies into COVID-19 origins, including in PRC, to better understand this pandemic and prevent future ones. pic.twitter.com/olEWTNUH7k

The UN health agency has been under intensifying pressure to conduct a new, more in-depth investigation into how the disease that has killed more than four million people around the world first emerged.

The WHO was only able to send a team of independent, international experts to Wuhan in January, more than a year after Covid-19 first surfaced there, to help Chinese counterparts probe the pandemic's origins.

Long derided as a right-wing conspiracy theory and vehemently rejected by Beijing, the idea that Covid-19 may have emerged from a lab leak has been gaining momentum.

Beijing has repeatedly insisted that a leak would have been "extremely unlikely", citing the conclusion reached by a joint WHO-Chinese mission to Wuhan in January.

But earlier this month, the WHO said a second stage of the international probe should include audits of Chinese labs, amid increasing pressure from the United States for an investigation into a biotech lab in Wuhan.

China said that such a proposal showed "disrespect" and "arrogance towards science".

Blinken and Tedro also "discussed opportunities for collaboration to continue reforming and strengthening the WHO," State Department spokesman Price said.

Former President Donald Trump had begun to pull the US out of the WHO, accusing it of being in thrall to China, but after his election to the White House, Joe Biden reversed that decision.