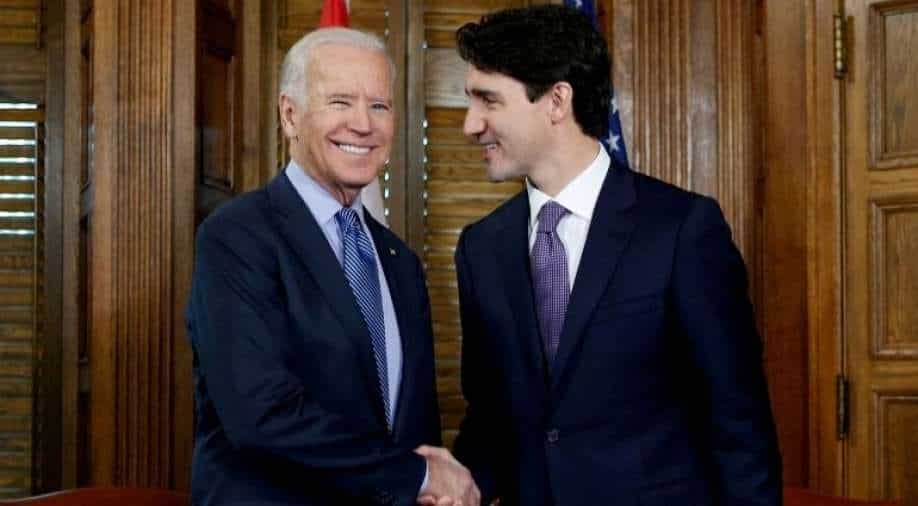 Trudeau, who has been keen to embrace the new president and turn the page on the often tumultuous Donald Trump years, was the first foreign leader to speak with Biden since Wednesday's inauguration

Canadian leader Justin Trudeau and new US President Joe Biden spoke on the phone Friday on an extensive range of topics, and made plans to meet in person "next month," Ottawa said.

"The two leaders agreed to meet next month in order to advance the important work of renewing the deep and enduring friendship between Canada and the United States," Trudeau's office said in a statement.

Trudeau, who has been keen to embrace the new president and turn the page on the often tumultuous Donald Trump years, was the first foreign leader to speak with Biden since Wednesday's inauguration.

"They discussed collaboration on vaccines and acknowledged that the two countries’ efforts are strengthened by existing exchanges of medical personnel and the flow of critical medical supplies," according to a readout of the call.

The two also agreed to expand cooperation on continental defence and in the Arctic and said their respective top defence and foreign affairs would be meeting at the earliest opportunity.

Trudeau earlier on Friday hailed Biden's arrival as a "new era" for bilateral ties but the relationship has begun with an early disagreement after Biden scrapped the Keystone XL oil pipeline from Canada to the United States on his first day in office on Wednesday.

Pipeline builder TC Energy Corp said it would eliminate more than 1,000 construction jobs in coming weeks due to the cancellation.

"The prime minister raised Canada’s disappointment with the United States’ decision on the Keystone XL pipeline," according to the readout, which noted that Trudeau also brought up the "the importance of the softwood lumber industry, and urged the removal of duties."

The long-running dispute saw the Trump administration impose tariffs against what it saw as unfair subsidies for Canadian exporters of softwood lumber, which is used in home construction.