US Navy seizes approximately 1,400 AK-47 assault rifles and ammunition from a stateless vessel 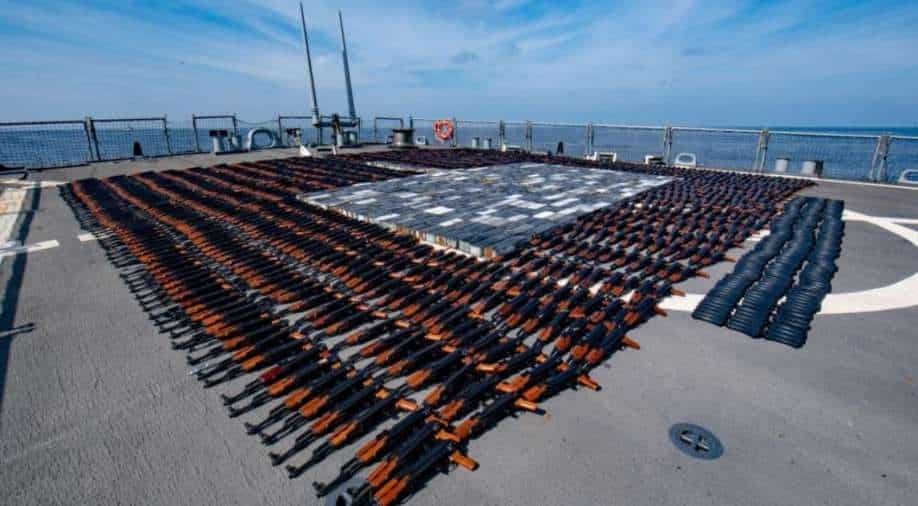 A handout photo released on December 22, 2021 by the US Defense Visual Information Distribution Service (DVIDS) shows AK-47 rifles and ammunition seized by the US NAVY. Photograph:( AFP )

The vessel had five crew members, who identified themselves as Yemeni nationals

The US Navy informed that its Fifth Fleet has seized illicit weapons from a stateless fishing vessel during a flag verification boarding in accordance with customary international law in the North Arabian Sea, December 20.

In a statement dated December 22, US Naval Forces Central Command, or NAVCENT, informed that they have seized approximately 1,400 AK-47 assault rifles and 226,600 rounds of ammunition.

The initial assessment revealed that the vessel in question was originated in Iran and transited international waters along a route "historically used to traffic weapons unlawfully to the Houthis in Yemen".

The vessel had five crew members, who identified themselves as Yemeni nationals. As per NAVCENT's statement, they will be returned to Yemen.

The fleet said that the naval forces determined the vessel was a "hazard to navigation for commercial shipping" and sank it after removing the crew and cargo.

It is important to note that the direct or indirect supply, sale or transfer of weapons to the Houthis violates UN Security Council Resolutions and US sanctions.

As per the above-mentioned statement, the US Navy patrol coastal ships USS Tempest (PC 2) and USS Typhoon (PC 5) found the weapons during a search conducted by embarked US Coast Guard personnel.

The seized weapons and ammunition were later transported to the guided-missile destroyer USS O’Kane (DDG 77) where they await final disposition.

For the unversed, a coalition led by Saudi Arabia has been fighting the Iran-aligned Houthi movement since early 2015 after the group ousted the internationally recognised government from Sanaa.