US: Jeff Sessions under fire after report he too met with Russian ambassador 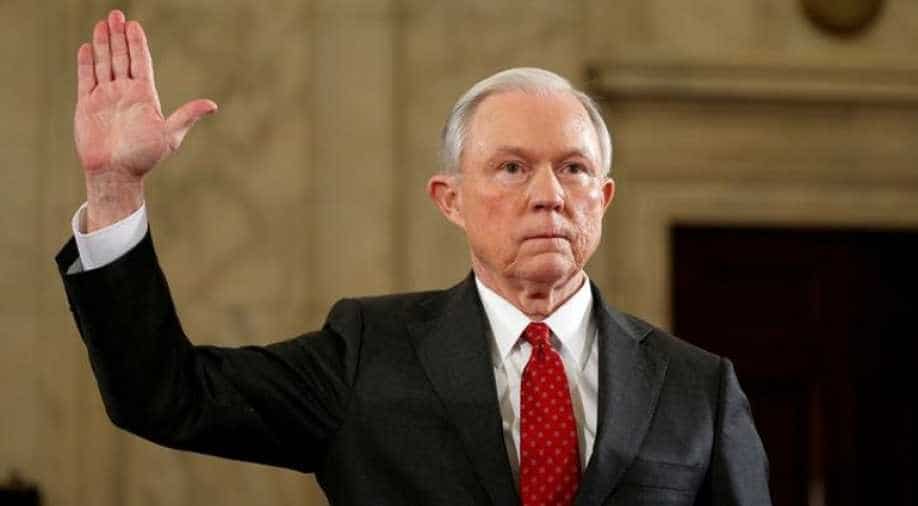 'I did not have communications with the Russians,' Sessions had said under oath at his Senate confirmation hearings. Photograph:( Reuters )

US Attorney General Jeff Sessions came under fire late Wednesday after the Washington Post reported he met twice last year with Russia's ambassador to Washington, seemingly contradicting statements he made in Senate confirmation hearings in January.

The revelation cast a fresh cloud over President Donald Trump's administration -- which has repeatedly denied any suspected ties between members of his election team and Russia -- which US intelligence says interfered in the 2016 campaign against Hillary Clinton.

The White House quickly labelled the report an attack by partisan Democrats, confirming the meetings but arguing Sessions did nothing wrong.

In a statement, Sessions said: "I never met with any Russian officials to discuss issues of the campaign. I have no idea what this allegation is about. It is false."

But with US intelligence agencies, the Department of Justice, and four Congressional committees examining the Russia scandal, Democrats demanded that Sessions -- the Trump administration's top law enforcement official -- recuse himself from investigations, and for Congress to name an independent special investigator to oversee a broad probe.

The Washington Post reported late Wednesday that Sessions -- formerly a senator who advised Trump's campaign on foreign policy and other issues -- met Ambassador Sergey Kislyak in July and September, just as accusations of Russian interference in the election were mounting.

Sessions, however, told his confirmation hearing at the Senate Judiciary Committee on January 10 that he did not know of contacts between Trump campaign members and Russia.

"I did not have communications with the Russians," he said under oath.

Nancy Pelosi, the top Democrat in the Senate, called for Sessions to step down. "After lying under oath to Congress about his own communications with the Russian, the attorney general must resign," she said.

Democrat Elijah Cummings of the House of Representative's Oversight Committee echoed that call in a statement. "When Senator Sessions testified under oath that 'I did not have communications with the Russians,' his statement was demonstrably false, yet he let it stand for weeks," Cummings said. "Attorney General Sessions should resign immediately, and there is no longer any question that we need a truly independent commission to investigate this issue."

A White House official dubbed the latest report an "attack".

"This is the latest attack against the Trump administration by partisan Democrats," the official said.

"Sessions met with the ambassador in an official capacity as a member of the Senate Armed Services Committee, which is entirely consistent with his testimony."

Sessions was confirmed as attorney general on February 8, moving in place to oversee Justice Department and Federal Bureau of Investigation probes into the alleged communications between Trump campaign officials and Moscow.

The White House also labeled that report "false" and has accused Democrats, the media and the intelligence community of a political effort to undermine the Trump administration.

Three people have resigned from Trump's administration, also including his election campaign, amid revelations of their connections to Russia. The most recent was Michael Flynn, Trump's pick to head national security, who resigned after it became public knowledge that he spoke to the Russian ambassador about US sanctions against Russia, then lied about it. During the 2016 election, Manafort resigned, as mentioned above. And so did another Trump aide, Carter Page, after his connections to Russia came to light.

The Washington Post report emerged as Democrats had begun warning the White House and Republican lawmakers against trying to shut down any investigations of alleged Russian interference.

The warnings came after Trump's staff sought to enlist the FBI, reportedly the CIA and two Republicans who head committees leading the Russia investigations, to knock down media reports on the alleged links.

US intelligence chiefs announced in December that they had concluded that Russian President Vladimir Putin was behind a hacking and misinformation campaign to hurt Clinton and boost Trump's chances to win the November 8 presidential election.

But they have not made their evidence public, and the Kremlin denies it.