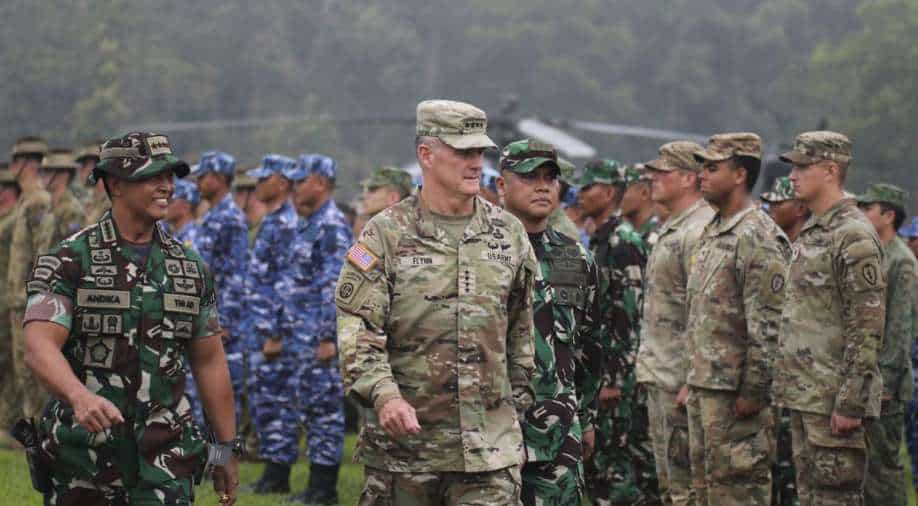 More than 5,000 soldiers from the US, Indonesia, Australia, Japan and Singapore were participating in this year's exercises, making them the largest since the drills were established in 2009.

On Indonesia's Sumatra island, annual combined military drills between the US and Indonesian forces picked up steam on Wednesday. For the first time, soldiers from other alliance countries took part, a demonstration of strengthened ties despite rising Chinese maritime activities in the Indo-Pacific.

The exercises this year featured more than 5,000 soldiers from the US, Indonesia, Australia, Japan, and Singapore, making them the biggest since the drills began in 2009. According to a statement from the US Embassy in Jakarta, the exercises are intended to improve interoperability, capability, trust, and cooperation in support of a free and open Indo-Pacific.

“It's a symbol of the US-Indonesia bond and the growing relationship between land forces in this consequential region,” Gen Charles Flynn, Commanding General of US Army Pacific, said in the statement. “Because land forces are the glue that binds the region's security architecture together.”

In a ceremony on Wednesday morning in the seaside town of Baturaja in the province of South Sumatra, Flynn and Indonesia's Military Chief Gen Andika Perkasa officially began the joint exercises. Exercises involving the army, navy, air force, and marines will continue through August 14.

In response to US House Speaker Nancy Pelosi's visit to self-governing Taiwan, which China claims as part of its territory to be annexed by force if necessary, the Chinese Defense Ministry announced Tuesday night that it would conduct a series of targeted military operations to "safeguard national sovereignty." The planned two-week drills have since begun.

Additionally, China has become more adamant about its claim to almost the whole South China Sea.
The number of interceptions by Chinese aircraft and ships in the Pacific region with US and other partner forces has increased significantly over the past five years, according to US Gen Mark Milley, chairman of the Joint Chiefs of Staff, and the number of unsafe interactions has increased by comparable amounts.

“The message is the Chinese military, in the air and at sea, have become significantly more and noticeably more aggressive in this particular region,” Milley said last month during a trip to the Indo-Pacific that included a stop in Indonesia.

According to Milley, Indonesia has always been an important US ally and is strategically important to the area. The US granted Indonesia a $13.9 billion sale of cutting-edge fighter planes earlier this year. And in Jakarta in December of last year, agreements for expanded joint naval drills between the US and Indonesia were signed by Secretary of State Antony Blinken.

Although relations between Indonesia and China are usually favourable, Jakarta has voiced alarm over Chinese intrusion into its exclusive economic zone in the South China Sea, which China claims almost entirely.

As the highest-ranking American official to visit the self-governing island in 25 years, Pelosi arrived in Taiwan late on Tuesday, just in time for the US-Indonesia military drills. Beijing sees foreign dignitaries' visits as a confirmation of the sovereignty of the island.

The US and other democracies in the region are supported by a "free and open" Indo-Pacific vision of security and trade, according to Japan's Ground Self-Defence Force, which is taking part in the exercises for the first time.
China views the increased drills as a threat. The US has been charged with forming an Indo-Pacific alliance akin to NATO in order to purposefully incite conflict, according to Chinese state media.