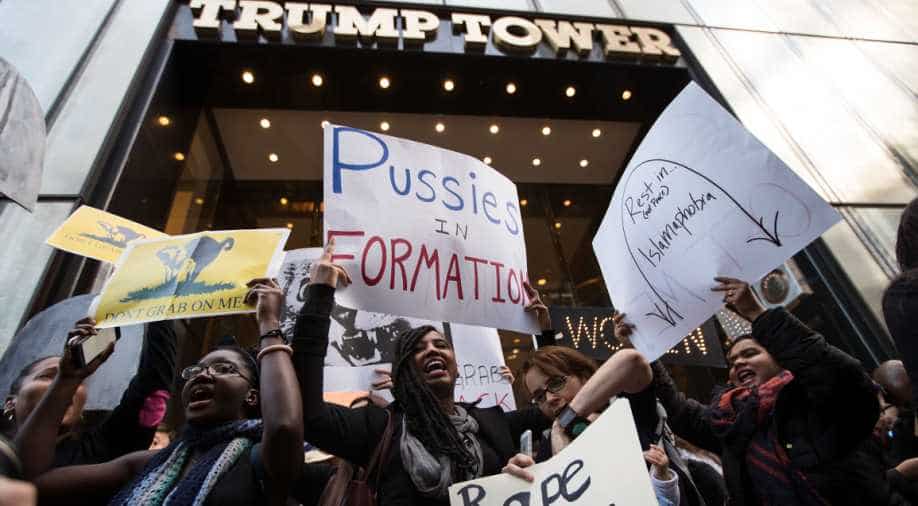 Thousands of people across America took to the streets to riot in a show of protest against the thought of a Donald Trump presidency.

NOW: Thousands of students at Berkeley High School in CA walked out of class with their teachers, to say that he is not their president. pic.twitter.com/vcKGKDPdE9

The LA Times reports that shortly after Trump gave his victory speech in New York, at about 3 am NY time, about 2,000 people rallied at UCLA, when two separate protests joined together, UCLA Seargeant Miguel Banuelos told the LA Times.

The UCLA protest peaked at 1 am local time, when a Trump pinata was set on fire in a trash can, the LA Times reports. There were five businesses who reported broken windows, and one incident of vandalism.

Hundreds of students march from freshman dorms to I.V. chanting "Fuck Donald Trump" and "Not my president." pic.twitter.com/8wx7dU01GA

The Daily Nexus, the student paper at UC Santa Barbara, reports that students there waved Mexican flags and denouced Trump with profane language.

ABC reports that about 100 protesters took to the Capital Hill neighbourhood of Seatle to block roads and set garbage bins on fire. ABC also reports that hundreds at the University of Pittsburgh marched through the streets, mostly calling for unity.

In Pennsylvania, hundreds of University of Pittsburgh students marched through the streets, with some in the crowd calling for unity, according to the student-run campus newspaper, the Pitt News.

The Pitt News' Twitter account posted videos of peaceful protests that took place the morning after the election results were announced.

The Union Square protest is hosted by a group called the Socialist Alternative, and they plan to march for over 40 blocks to picket outside the Trump Tower, NBC New York reports. The Columbus Circle demonstration is hosted by the anti-racism group Answer Coalition, and so far about 1,000 people have indicated they plan to attend.

Some in New York didn't even wait for Trump to be declated winner, booing the Republican presidential candidate as he was on his way to cast his ballot.

Meanwhile, Teen Vogue reports that calls have doubled for a teen suicide hotline, many from the LGBTQ community, with "election" and "Trump" the two words cited most by testers.

This is by no means an exhaustive list of all the anti-Trump protests, or negative consequences, since the announcement was made that he will be the next American president. No doubt there will be more protests to come -- it has not even been a full 24 hours.

But Trump pledged to be a president for "all Americans", and many don't seem to believe that will come true.

While Trump led in the all-important electoral votes, defeating Clinton by a high margin of 279 to 228, Clinton led the popular vote with about 200,000 more votes overall.