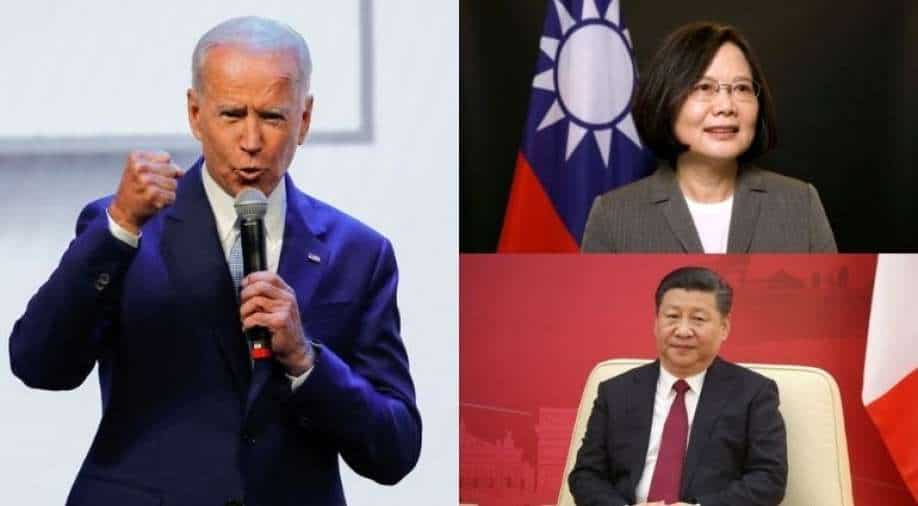 In this combination of images, US President Joe Biden, Taiwan President Tsai Ing-wen and Chinese President Xi Jinping can be seen Photograph:( Agencies )

US President Joe Biden has signed a defence spending budget that states that Taiwan should be invited to the world's largest naval exercise next year.

Taiwan has emerged as a key factor in strained relations between China and the United States, the island's most important international backer and arms supplier despite the absence of formal diplomatic ties.

''The United States should continue to support the development of capable, ready, and modern defence forces necessary for Taiwan to maintain a sufficient self-defense capability,'' as per the National Defense Authorisation Act (NDAA).

Experts believe that invitation will act as a supplement to the efforts made by the US to help Taiwan against China's ''increasingly coercive and aggressive behavior.''

It comes as Taiwan tries to expand its presence on the international stage in the face of efforts by China to isolate the island.

China claims democratically governed Taiwan as its own territory and in the past two years has stepped up military and diplomatic pressure to assert its sovereignty claim, fuelling anger in Taipei and concern in Washington.

Carl Schuster, former director of operations at the US Pacific Command's Joint Intelligence Centre, said, "RIMPAC involvement is a political statement as much as a professional opportunity. The invitation, should it take place, marks Taiwan as a friend and partner of the United States."

"It is a (potential) opportunity to train alongside Taiwanese naval units and personnel, gain relationships and knowledge that may prove very important should China decide to attack Taiwan," Schuster said.

"Since it sends a strong political signal to China, Beijing will pressure many of the traditional Asian participants, such as South Korea, Malaysia, Indonesia, and the Philippines, to decline the invitation or refuse to participate in drills with the Taiwanese units. Something to think about since China reacts strongly to political signaling," he added.

China has stepped up its campaign to sideline Taiwan since Tsai's 2016 election win as she rejects Beijing's stance that the island is part of Chinese territory.