US condemns airstrike at children's hospital in Ukraine; Zelensky describes it as 'war crime' 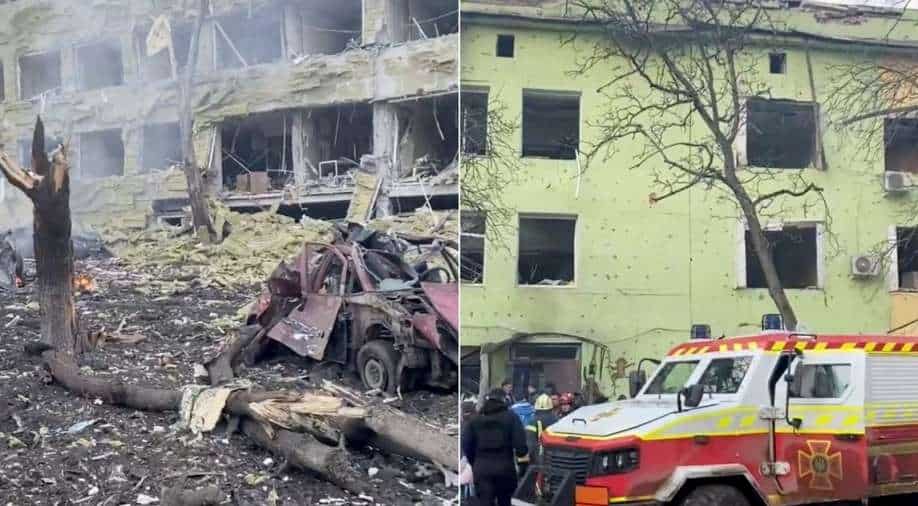 Debris is seen on site of the destroyed Mariupol children's hospital as Russia's invasion of Ukraine continues, in Mariupol, Ukraine, March 9, 2022 in this still image from a handout video obtained by Reuters. Photograph:( Reuters )

The United States has condemned the airstrike at children's hospital in the southeastern city of Mariupol that has wounded at least 17 staff members on Wednesday (March 9). Calling it 'barbaric', the White House slammed the use of force against civilians after an apparent Russian airstrike.

Press Secretary Jen Psaki told reporters when questioned about the strike, "It is horrifying to see the type of, the barbaric use of military force to go after innocent civilians in a sovereign country."

Authorities revealed that the attack injured women in labour and left children in the wreckage. Ukrainian President Volodymyr Zelensky has also slammed the airstrike and described it as a "war crime". He accused Russia of carrying out genocide.

In a televised address, Zelensky said, "What kind of country is this, the Russian Federation, which is afraid of hospitals, is afraid of maternity hospitals, and destroys them?"

"We have not done and would never do anything like this war crime in any of the cities of the Donetsk or Lugansk regions, or of any region... because we are people. But are you?" Zelensky asked.

IN PICS | What are war crimes? What are the rules of war?

As per the Mariupol city council, the hospital had been hit several times. The officials said airstrikes that held on maternity and paediatric units, blew out windows, ripped down partition walls and set fire to cars parked outside.

On being inquired on the same, Kremlin spokesman Dmitry Peskov said: "Russian forces do not fire on civilian targets." Russia calls its incursion a "special operation" to disarm its neighbour and dislodge leaders it calls "neo-Nazis."

WATCH | The US says Russia after Ukraine's bio-lab