US concerned by 'destabilising and malign activities' of Iran: Pompeo 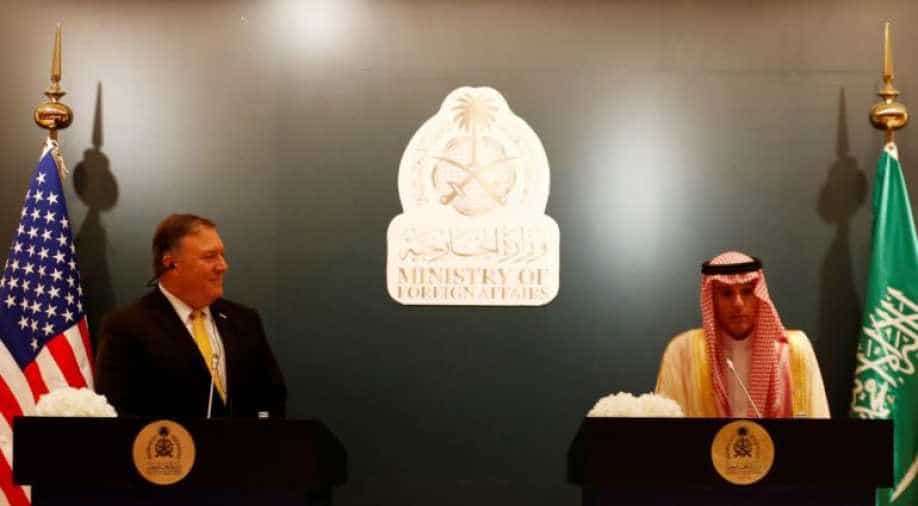 Pompeo also addressed the rift between Qatar and its neighbours

Pompeo was speaking on a flying visit to the region, where he had earlier met with Saudi King Salman in Riyadh and stressed the need for unity among Gulf allies as Washington aims to muster support for new sanctions against Iran.

The whirlwind trip to NATO in Brussels and to Middle East allies came only hours after Pompeo was confirmed as Trump's top diplomat. He has not even visited his own office yet, he told Netanyahu.

Speaking alongside the Israeli leader, Pompeo said in Tel Aviv: "We remain deeply concerned about Iran's dangerous escalation of threats towards Israel and the region."

He added: "Strong cooperation with close allies like (Israel) is critical to our efforts to counter Iran's destabilising and malign activities through the Middle East, and indeed, throughout the world."

Pompeo also said that the relocation of the American embassy to Jerusalem, a move set to take place on May 14, was "recognising (the) reality" of "Jerusalem as the capital of Israel and the seat of its government."

Netanyahu echoed Pompeo's focus on Iran, stressing the closeness of US and Israeli cooperation on the issue.

"I think the greatest threat to the world and to our two countries, and to all countries, is the marriage of militant Islam with nuclear weapons, and specifically the attempt of Iran to acquire nuclear weapons. We have had a very productive talk today on this subject," he said.

In Saudi Arabia earlier, Pompeo said that the US would abandon the 2015 nuclear deal with Iran, reached under President Donald Trump's predecessor, unless talks with European partners yield improvements to ensure the Islamic Republic never possesses nuclear weapons.

"Iran destabilises this entire region. It supports proxy militias and terrorist groups. It is an arms dealer to the Houthi rebels in Yemen. It supports the murderous Assad regime (in Syria) as well," he said in joint remarks with Saudi Foreign Minister Adel al-Jubeir.

"Gulf unity is necessary and we need to achieve it."

Pompeo also addressed the rift between Qatar and its neighbours, telling reporters after leaving Riyadh: "We are hopeful that they will, in their own way, figure out how to remove the dispute between them."

Saudi Arabia, along with the United Arab Emirates, Bahrain and Egypt, cut off travel and trade ties with Qatar last June, accusing it of supporting terrorism and Iran.

Doha has denied the accusations and has said its three fellow Gulf countries aim to curtail its sovereignty. Iran denies supporting terrorism or having sought to develop nuclear weapons.

The United States, which has military bases in both Qatar and some of the countries lined up against it, is trying to mediate the Qatar feud. Trump publicly sided with the Saudis and Emiratis early in the crisis, but is now pushing for a resolution to maintain a united front against Iran.

Yemen's armed Iranian-aligned Houthi movement has fired over 100 missiles into Saudi Arabia, the latest salvo killing a man on Saturday in the southern Saudi province of Jizan.

The United States and the Saudi-led coalition that intervened in Yemen's civil war in 2015 accuse Iran of providing the missiles to its Houthi allies, which Tehran denies.

Pompeo's trip comes as Trump considers whether or not to abandon a self-imposed May 12 deadline for the Iran nuclear deal he sees as deeply flawed.

He has called on Gulf allies to contribute funding and troops to stabilise areas in Iraq and Syria where a US-led coalition has largely defeated Islamic State jihadists.

Earlier this month, Jubeir said Saudi Arabia would be prepared to send troops into Syria under the US-led coalition if a decision is taken to widen it.

Asked about Saudi troops on the ground in Syria, Pompeo said: "We will sit down and talk about... how to best make sure that this is not America alone working on this, it's the Gulf states working alongside us."

On Wednesday, Iranian President Hassan Rouhani waved aside US and European discussions over changes to the nuclear accord and dismissed Trump as a "tradesman" who lacked the qualifications to deal with a complex international pact.

"We’ve certainly made some (progress with the Europeans)," Pompeo said on Sunday. "There is still work to do. They said, 'Great, we will support you if you get the fixes'."

Britain said on Sunday that it, France and Germany - the other signatories to the 2015 Iran deal along with Russia, China and the European Union - agreed that the accord was the best way of stopping Tehran from gaining nuclear weapons.

"(We) committed to continue working closely together and with the US on how to tackle the range of challenges that Iran poses – including those issues that a new deal might cover," a statement from British Prime Minister Theresa May's office said.

The 2015 agreement limited Iran's enrichment of uranium for nuclear fuel to help ensure it could not be turned to developing bomb material, and Tehran secured a removal of most international sanctions in return.

Iran has repeatedly said its ballistic missile programme has nothing to do with its nuclear work and is non-negotiable.

Trump sees three defects in the deal: a failure to address Iranian ballistic missiles the terms under which U.N. inspectors can visit allegedly suspect Iranian nuclear sites and "sunset" clauses under which key limits on the Iranian nuclear programme start to expire after 10 years.