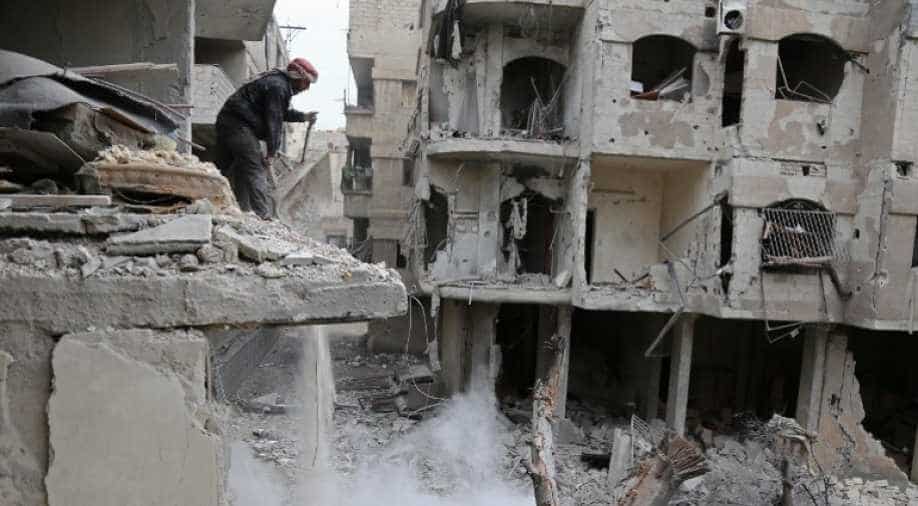 A Syrian man checks the site of Syrian government bombardments in Hamouria, in the besieged Eastern Ghouta region on the outskirts of the capital Damascus on February 22. Photograph:( AFP )

The UN Security Council on Friday delayed to 19:30 GMT a vote on a draft resolution demanding a 30-day ceasefire in Syria, diplomats said.

Negotiations were continuing to avoid a Russia veto of the text that would establish a truce to allow humanitarian aid deliveries and medical evacuations.

More than 400 civilians have been killed as Syrian regime air strikes and artillery fire pound the rebel-held enclave of Eastern Ghouta, in one of the seven-year conflict's bloodiest episodes.

French President Emmanuel Macron and German Chancellor Angela Merkel wrote to Russia's Vladimir Putin on Friday urging him to back a UN Security Council resolution for a ceasefire in Syria, France's presidency said.

The letter, sent while Macron and Merkel were at an EU summit in Brussels, asked Russia to support the draft resolution calling for a 30-day truce in Syria, mainly to allow aid to reach besieged Eastern Ghouta and allow evacuations, said the presidency.