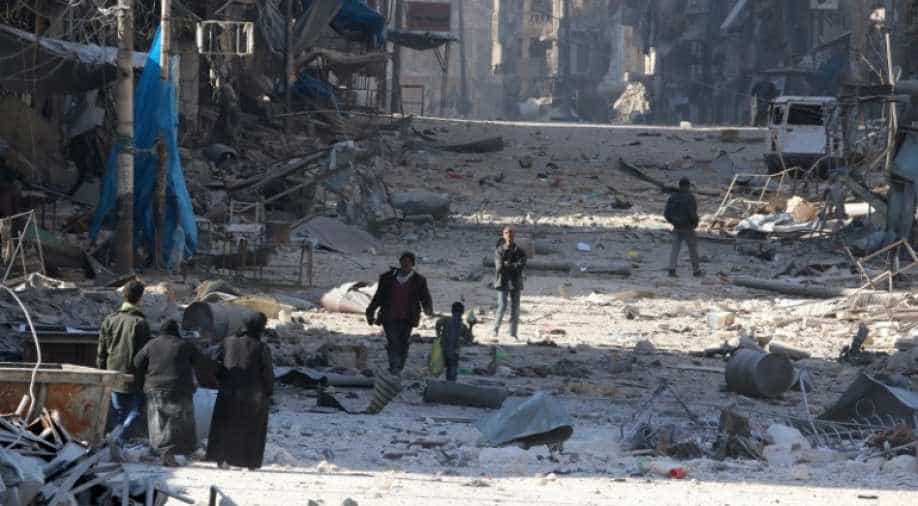 The briefing will come from a UN official in charge of humanitarian operations in the country and the UN mediator in Syria, Staffan de Mistura. Photograph:( Reuters )

The UN Security Council will hold an emergency meeting on Wednesday on the dire humanitarian crisis unfolding in Aleppo, diplomats said.

The meeting will begin immediately following a Security Council session on the adoption of a resolution reinforcing sanctions against North Korea, which is scheduled to begin at 1400 GMT.

The 15 ambassadors of the Security Council will get a videoconference briefing on the situation in Aleppo by a UN official in charge of humanitarian operations and the UN mediator in Syria, Staffan de Mistura.

In east Aleppo, thousands of civilians have fled the fighting and bombings as the Syrian government forces advanced against parts of the rebel-held areas.

The UN condemned on Tuesday the "descent into hell" being endured by civilians.

Up to 20,000 people have fled the regime offensive in the past 72 hours, the International Committee of the Red Cross said.

"France and its partners cannot remain silent in the face of what could be one of the biggest massacres of civilian population since World War II," said France's UN ambassador Francois Delattre on Tuesday.

He and his British counterpart Matthew Rycroft earlier in the day were pushing for the emergency council meeting on providing humanitarian relief to the besieged Syrian city.

East Aleppo has been under government siege for more than four months, with international aid stocks exhausted and food supplies running low.

Rycroft said the council would discuss plans for the UN to deliver much-needed food and medicine into Aleppo and evacuate the sick and wounded.

"Russia complained that the opposition had not agreed to this plan. Now they have, so I call on Russia to make sure the Syrian regime agrees," Rycroft said.