Ukraine crisis: Macron pushes for peace as Russian warships head to the Black Sea for drills 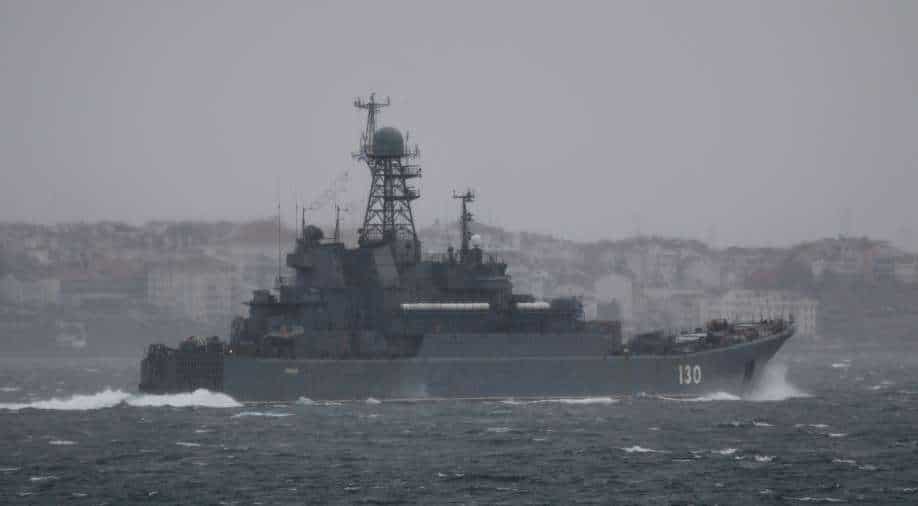 Russian Navy ship Korolev sets sail in the Dardanelles on its way to the Black Sea Photograph:( Reuters )

Amid tensions with Ukraine, in a security document submitted to NATO and the United States last month, the Kremlin had insisted that NATO should not induct former Soviet countries

Amid tensions with Russia, French President Macron called for "firm" dialogue with Putin's even as Russian warships made their way to the Black Sea for naval drills.

"We must find ways and means together to engage in a firm dialogue with Russia," Macron said, adding that it is the "only path to peace in Ukraine". The French president shuttled between Russia and Ukraine in an attempt to broker peace.

Meanwhile, Russian warships made their way towards the Black Sea on Tuesday, passing through Turkey's Bosphorus strait in a pre-planned military drill announced earlier.

President Tayyip Erdogan has also offered to mediate between Russia and Ukraine with Turkey being a NATO member. Russian warships  Korolev, the Minsk and the Kaliningrad passed through the Bosphorus on Tuesday with another three warships - Olenegorsky Gornyak, Georgy Pobedonosets and Pyotr Morgunov set to pass on Wednesday.

The United States has warned for the past few months that Russia is ready to invade Ukraine as it has massed over 100,000 troops along Ukraine's border, President Putin in recent days however has categorically dismissed the report but has insisted that NATO should not extend its border to the eastern front.

In a security document submitted to NATO and the United States last month, the Kremlin had insisted that NATO should not induct former Soviet countries into its fold referring to Ukraine. The European alliance however dismissed the suggestion.

Last week, at least 2,000 US troops had arrived in Europe as part of President Biden's push to deploy troops in Romania and Poland to bolster Ukraine and to keep Russia at bay amid hectic diplomatic activity.

After President Macron's visit to the crisis centres, EU's diplomatic chief Josep Borrell pointed out that there is  an "element of detente" while adding that "as far as people are willing to sit at the table and talk I think that there is a hope for not going into military confrontation."