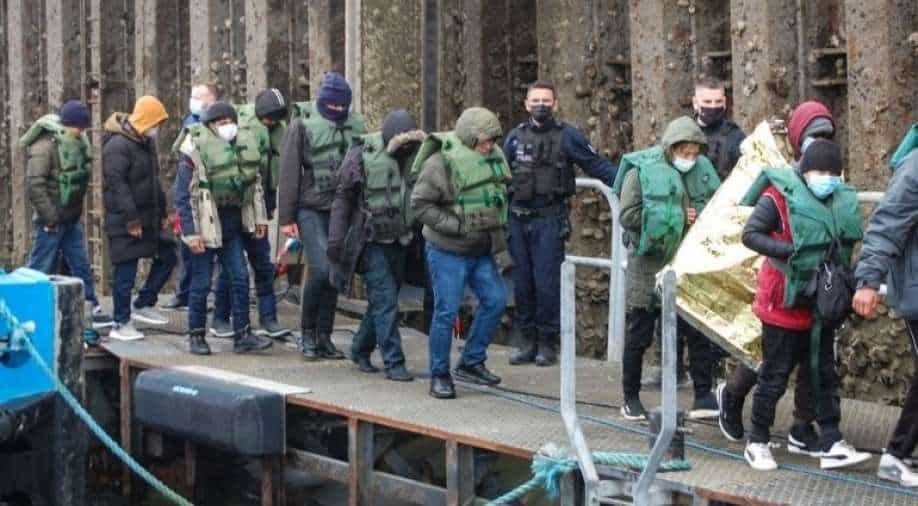 French policemen surround migrants who disembark a boat after they were rescued when their makeshift boat encountered difficulties during an attempt to cross the Channel to reach England on April 1, 2021 in the French port city of Calais. Photograph:( AFP )

The legislation makes it a criminal offence to arrive in the UK without permission, with a maximum sentence for those entering the country unlawfully increasing from six months to four years

Britain has announced it will seek harsher sentences for migrants caught entering the country without permission amid a record-breaking surge in arrivals over the English Channel.

The stricter prison sentences for both migrants and people smugglers come as part of Home Secretary Priti Patel's plans to overhaul asylum rules in a bid to prevent what her department has characterised as "asylum shopping".

The legislation announced Saturday makes it a criminal offence to arrive in the UK without permission, with a maximum sentence for those entering the country unlawfully increasing from six months to four years.

Under the law set for its first reading in parliament on Tuesday, people smugglers will face life sentences, up from the current maximum of 14 years.

Patel said the plans were "fair but firm", adding that the UK would "welcome people through safe and legal routes whilst preventing abuse of the system, cracking down on illegal entry and the criminality associated with it".

The bill's unveiling comes as Britain's asylum system strains under the pressure of a record number of arrivals over the Channel.

A total of nearly 6,000 migrants have made the dangerous crossing in the first six months of 2021.

The total number of 8,417 arrivals for the whole of 2020 is likely to be overtaken in the next two months if trends continue, according to figures from the domestic Press Association news agency.

The Home Office said it was "very likely that those travelling to the UK via small boat will have come from a safe European Union country in which they could have claimed asylum".

"Where this is the case, they are not seeking refuge at the earliest opportunity or showing good reason for seeking to enter the UK illegally but are instead 'asylum shopping' by picking the UK as a preferred destination over others and using an illegal route to get here," it added.

The government launched plans earlier this year for what it called the biggest changes to asylum rules in decades, saying the current system was overwhelmed.

The plan drew fire from refugee groups, who accused the ruling Conservatives of political cynicism.

"Instead of peddling deliberately misleading myths and untruths about asylum and migration, the Home Office should be establishing safe routes for those few people escaping persecution who wish to seek asylum here," Amnesty International UK's refugee and migrant rights director said.