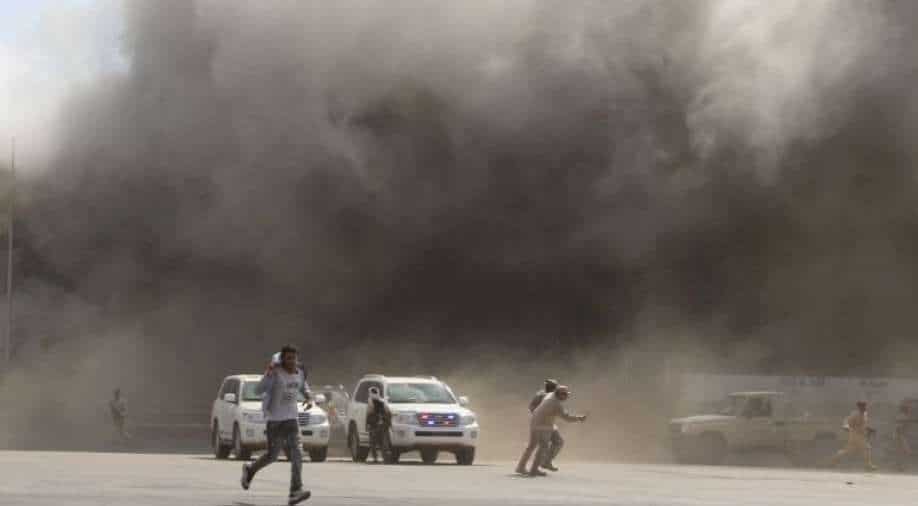 Hours after the attack, a second explosion was heard around Aden's Maasheq presidential palace where the cabinet members including Prime Minister Maeen Abdulmalik

At least 20 people were killed and dozens wounded in an attack on Aden airport on Wednesday moments after a plane landed carrying a newly formed Saudi-backed cabinet for government-held parts of Yemen.

As smoke billowed out of the airport terminal from an initial blast, with debris strewn across the area and people rushing to tend to the wounded, a second explosion took place.

Hours after the attack, a second explosion was heard around Aden's Maasheq presidential palace where the cabinet members including Prime Minister Maeen Abdulmalik, as well as the Saudi ambassador to Yemen, had been taken to safely, residents and local media said.

In the airport attack, loud blasts and gunfire were heard shortly after the plane arrived from Riyadh, witnesses said. A local security source said three mortar shells had landed on the airport's hall.

Yemen's internationally recognised government and southern separatists formed a power-sharing cabinet on December 18, forging a joint front against the Huthi rebels who have seized the capital Sanaa and much of the north.

Both Yemeni Information Minister Moammar Al-Eryani and Prime Minister Moeen Abdulmalik Saeed said that all the members of the government were safe.

"We assure our great people that members of the government are fine, and we assure you that the cowardly terrorist attack by the Iran-supported Huthi militia will not deter us from carrying out our patriotic duty," Eryani said on Twitter.

The new cabinet unites the government of President Abd-Rabbu Mansour Hadi with southern separatists, intended to fulfil a Saudi aim of ending a feud among Riyadh's allies.

The two groups are the main Yemeni factions in a southern-based, Saudi-backed alliance fighting the Iran-aligned Houthi movement that controls the north, including the capital Sanaa.

TV footage from the Saudi-owned Al Arabiya channel showed dozens of people leaving the airplane when a first blast hit the airport's hall. Heavy gunfire from armoured vehicles followed with plumes of white and black smoke rising from the scene.

Other video showed damage to the terminal's concrete walls and smashed glass.

Government officials were among the casualties in the airport attack, sources said.

The southern port city of Aden has been mired in violence because of a rift between the separatists and Hadi's government, based there after being driven from the capital by the Houthis in 2014.

The Saudi-led coalition announced the new power-sharing cabinet this month after more than a year of intense Saudi mediation between the government and the separatists.

The Houthis denied any responsibility for the attack. The separatists said their leadership was the main target of the attackers and not the government.