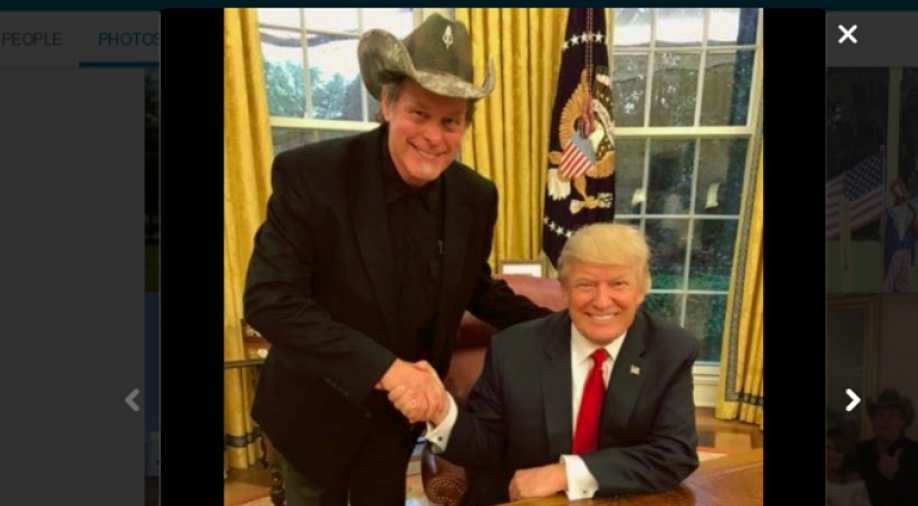 Ted Nugent was the subject of a Secret Service investigation after saying that if Obama were reelected in 2012, he, Nugent, 'would be dead or in jail'||While Trump was right to blast Griffin for the photo, he was wrong to invite a person who threatened a US president with murder to the White House

For all the fuss over the disturbing Kathy Griffin photo, the one of her holding a bloody severed head that appears to look a lot like Donald Trump, it's important to remember that nobody supported or defended it.

Everybody, everybody thought it was bad: Democrats, Republicans, the left, the right, even Kathy Griffin! Afterwards Griffin said, "I beg your forgiveness, I went too far." She asked for the photo to be taken down.

So if everyone agrees, why are so many people still talking about it?

Trump is desperate for a pretext to rail against something, given the heat on him in the ever-expanding Russia probe and his overseas trip where he was celebrated in Saudi Arabia but scolded America's traditional European allies.

No president in American history has ever been mired in this much scandal, so early. It's not surprising that Trump complain when he legitimately is the victim of something all agree is bad.

But when President Obama was threatened with death, did Trump come to his defence? Did he say US presidents can be criticised, but death threats go too far?

Nope. And this brings us to Ted Nugent, the rock and roll musician.

Ted Nugent openly threatened Obama with death. He called Obama a "subhuman mongrel" a "piece of sh*t", and he became the target of a Secret Service investigation in 2012 after saying that if Obama were reelected, Nugent would "either be dead or in jail by this time next year".

Nugent is famously a hunter with many, many guns and an NRA member. I personally saw him in concert in Toronto in the early 2000s, and he protested Canadian hunting laws by shooting his amplifier with a crossbow.

Here is Nugent, a guest in the White House.

The claim that Barron Trump, 70-year-old Donald's 11-year-old son, was watching TV and happened to see Griffin holding his father's head and thought it was real...well, it seems awfully scripted as a story for sympathy. But it could be real. Either way, again, Griffin was wrong to do it, a verdict that everyone agrees with! (Well almost everyone: the photographer defends it.)

Also, while Griffin was fired from her annual CNN new year's gig, Nugent has been a guest on Fox News for years. This shows no signs of abating.

The point isn't that Trump complained about Griffin, it's that he welcomed into the White House a person who openly threatened to kill the previous president. He isn't wrong to blame Griffin, but the hypocrisy is staggering and flagrant.

The main problem isn't consistency, it's that no American president should be so comfortable with a man who threatened to murder an American president, let alone being photographed with him in the White House. Not just being this comfortable personally, but signalling it, publicising it, is extremely dangerous.

Germany warns its delegates against Egyptian agents spying on them at COP27: Reports

China trying to 'sabotage' digital infrastructure of other countries: Report