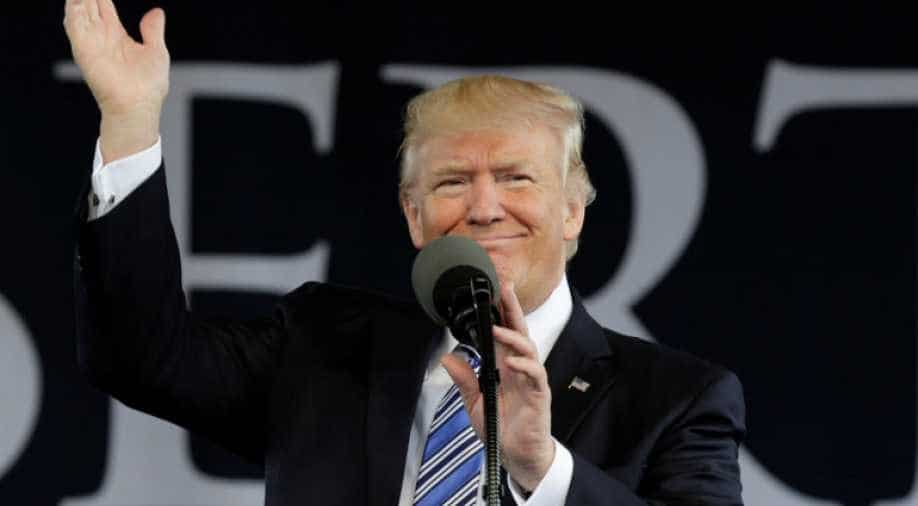 Trump will do six stops in eight days. Known to dislike long trips, he will be joined by his wife Melania, who has until now cut a highly discreet figure at his side.? Photograph:( Reuters )

From Riyadh to Jerusalem, Bethlehem, Rome, Brussels and Sicily, Donald Trump leaves a swirl of domestic woes behind Friday to embark on a first foreign trip that will be closely watched in capitals the world over.

The avalanche of revelations in the run-up to his departure have eroded Trump's standing at home -- where the parallels with Richard Nixon's ill-fated presidency are now being openly drawn.

They also revived questions about his ability to strike a presidential tone with his foreign counterparts.

"Truth is, nobody knows how Donald Trump is going to act or what he's going to say in meetings of this kind because he's never done it before," summed up Stephen Sestanovich of the Council on Foreign Relations.

White House staff cast the 70-year-old's "friendly but candid" style as an asset in his dealings with foreign leaders.

For ex-CIA analyst Bruce Riedel, the comparison that springs most obviously to mind is with Nixon's 1974 trip to the Middle East, which he hoped would yield a diplomatic success to 'divert attention away from the Watergate scandal'

But as the Republican takes his first steps as head of state on the world stage, his every word, action and tweet will be under the microscope.

Known to dislike long trips, the president will be joined by his wife Melania, who has until now cut a highly discreet figure at his side.

His daughter Ivanka and son-in-law Jared Kushner -- two of his closest advisors -- will also be on board Air Force One.

What message will Trump be taking to the world?

On foreign policy, the president has pulled back spectacularly from his most provocative campaign pledges, towards a stance in many respects similar to his predecessor Barack Obama.

But the real estate magnate will still need to explain to foreign partners how his favorite slogan -- "America First" -- can be compatible with multilateralism.

Catchphrases aside, many questions remain unanswered.

Speech on Islam
The White House touts a "historic" trip during which Trump -- in visits to Saudi Arabia, the Vatican and Jerusalem -- will reach out to leaders of the world's major monotheistic faiths.

During his two days in Riyadh, he will likely seek to strike a contrast with the Democrat Obama, who was widely viewed with suspicion by the Sunni Muslim monarchies of the Gulf.

The combination of tough talk on Shiite Iran, a lower-key focus on human rights, and the likely announcement of new arms deals should in theory earn the US leader a warm welcome.

Trump's delivery of a speech on Islam before dozens of Muslim leaders gathered in the Saudi capital could prove a far more delicate exercise, however, given the tensions sparked by his travel ban targeting several Muslim-majority nations -- now stuck in the US courts.

"I'll speak with Muslim leaders and challenge them to fight hatred and extremism, and embrace a peaceful future for their faith," Trump promised ahead of the trip.

In Israel, Trump has hopes -- though it is still unclear how -- of reviving the moribund peace process, meeting both his "friend" Benjamin Netanyahu in Jerusalem, and Palestinian president Mahmud Abbas in Bethlehem.

But the Israeli leg of his trip is already awash in controversy -- from a row over his visit to Jerusalem's Western Wall, the holiest prayer site for Jews, to Trump's alleged disclosure of Israeli intelligence to Russian officials.

Trump's meeting with Pope Francis -- two men at odds on everything from climate change to refugee policy -- remains highly unpredictable, although the pontiff says he will give America's bullish leader an open-minded hearing.

Finally, the president's trip will wrap up in Europe where his shifting pronouncements on Brexit, NATO and the future of the European Union have sown confusion among longstanding allies.

Trump will meet members of the North Atlantic alliance in Brussels, before heading on to a G7 summit in Taormina, a picturesque Sicilian town overlooking the Mediterranean.

"Does he invest in the relationship with the Atlantic partners in the same way that every president has done since Pearl Harbor?" wondered Charles Kupchan, former advisor to Obama.

"He came into office suggesting not. He has since said and done things suggesting maybe. But I think everyone will be watching for that."

Trump has yet to personally reassert the US commitment to Article 5, NATO's mutual defense clause.

The Nixon trip
How his trip is perceived by fellow Americans is key for the president.

Well aware of heightened concerns about terrorism, the Republican hopes to bring back hard commitments from US allies in the fight against the Islamic State group.

But however powerful the images of Trump's globe-trotting turn out to be, they have little chance of eclipsing the scandals convulsing his White House back home.

For ex-CIA analyst Bruce Riedel, a senior fellow at the Brookings Institution, the comparison that springs most obviously to mind is with Nixon's 1974 trip to the Middle East, which he hoped would yield a diplomatic success to "divert attention away from the Watergate scandal."

"It did not work," said Riedel.