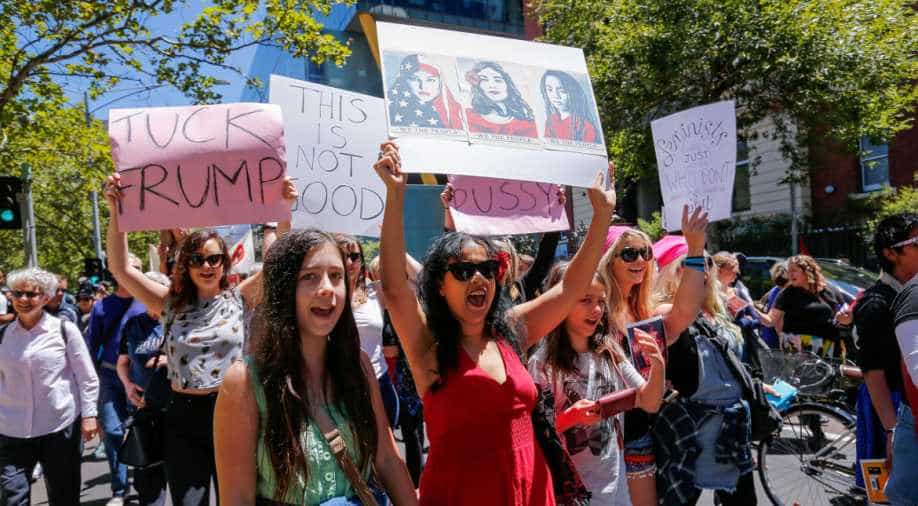 Protesters take part in the Melbourne rally to protest against the Trump Inauguration on January 21, 2017 in Melbourne, Australia. The marches in Australia were organised to show solidarity with those marching on Washington DC and around the world. Photograph:( Getty )

Donald Trump has banned employees of the Environmental Protection Agency (EPA) from speaking with reporters and from giving social media updates, the Associated Press reports.

The EPA is headed by Rick Perry, the former Texas governor who Salon reports is closely connected to the Texas oil industry, including corporate roles in two petroleum companies pushing to build the 1,200-mile crude oil pipeline in North Dakota that has launched fierce backlash. Trump also has ties to a company building the pipeline. Yesterday the piple was approved. This approval officially reversed Obama's position, and overturned what environmentalists considered to be a triumph after months-long protests, where demonstrators were soaked by officials with hoses during cold winter weather, attacked by dogs and shot at with rubber bullets.

Before he was tasked with leading it, Perry publicly called for the EPA to be abolished. Trump's pick for the director of the EPA, Scott Pruitt, has challenged EPA policy in court, The Hill reports.

The ban against the EPA comes as other agency staff report being barred from communicating with the general public and with members of Congress, The Hill reports.

This is only the latest chill felt by federal employees since October.

In the days soon after the 2016 US election, the Trump team reportedly sought the names of individual federal employees who worked on climate change projects, and in January House Republicans revived an obscure law called the Holman Rule, which allows the government to reduce the salary of federal employees to a crippling $1.

Oh, hey, remember when the transition team asked for names of climate change staff at DOE and women's program staff at State? This is why. https://t.co/fAxAOliFwG

There were other bans, too: BuzzFeed reports that the Department of Agriculture told its employees not to share information about research or Tweet under the agency's name, while the Department of Health and Human Services was also told not to speak to public officials, the Huffington Post reports.

Days after the pro-women, anti-Trump Women's March--where Americans in over 500 US cities took part in what might be the largest ever demonstration in American history, and were joined by millions from around the world--Republicans have made several proposals targeting protesters.

While peaceful assembly is protected by the American Constitution, the protection is not absolute. Republicans appear to be trying to bend it as much as possible.

For example, in Minnesota--where police shot and killed a 32-year-old black man, Philando Castile--Black Lives Matter protesters set up encampments and took to the highway to shutdown traffic, MPR News reports. In the days immediately following the police shooting dozens of protesters were arrested, though the charges were dropped; Police say it cost more than $1 million in officer overtime and some damages, according to the report.

Republican Nick Zerwas pushed for bills to make it easier for prosecutors to charge protesters for blocking highways, resulting in a gross misdemeanour charge carrying up to a year in jail. Another proposed change would allow police departments to sue convicted protesters for the costs of demonstrating.

"At some point, the rule of law has to matter. I think it's time to show there is accountability," Zerwas said. The proposals could be brought about with more Republican power in the Capitol this year.

If approved, protesters would have to pay out of their own pocket for protesting, so long as police convicted them of protesting. This would incentivise police to convict protesters, and the threat of jail or fines would likely discourage protesting in general.

Meanwhile in Chicago, the city has paid $500 million for judgements and settlements related to police misconduct in the last ten years, ChicagoCBS reports. This money, paid to victims of police brutality or to family members of people killed by the police, would be funded by the public.