Trump rally underscores Republican tension over how to win in 2022 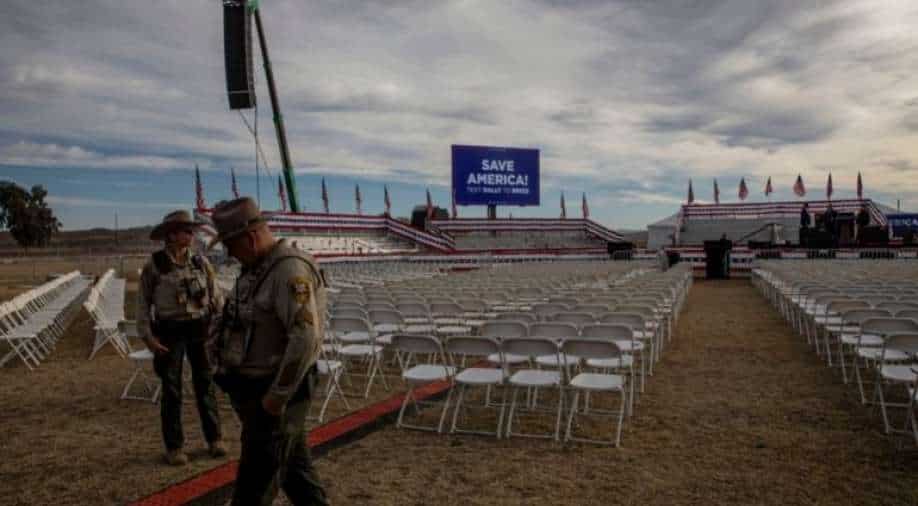 Trump’s rally in Arizona on Saturday will feature a host of election deniers. His involvement in state races and his inability to let go of his 2020 loss worries many Republicans

Former President Donald Trump returned Saturday to Arizona, a cradle of his political movement, to headline a rally in the desert that was a striking testament to how he has elevated fringe beliefs and the politicians who spread them — even as other Republicans openly worry that voters will ultimately punish their party for it.

Trump’s favored candidate for governor, Kari Lake, is a first-time office seeker who has threatened to jail the state’s top elections official. His chosen candidate to replace that elections official, a Democrat, is a state legislator named Mark Finchem, who was with a group of demonstrators outside the Capitol Jan. 6 as rioters tried to stop the certification of the 2020 election. And one of his most unflinching defenders in Congress is Rep. Paul Gosar, who was censured by his colleagues for posting an animated video online that depicted him killing a Democratic congresswoman and assaulting President Joe Biden.

All three spoke at Trump’s rally in front of thousands of supporters on Saturday in the town of Florence, outside Phoenix. It was the first stadium-style political event he has held so far in this midterm election year in which he will try to deepen his imprint on Republicans running for office at all levels.

When Trump took the stage in the evening, he lavished praise on the slate of election-denier candidates in attendance. And he suggested that perpetuating his grievances about being cheated would be a decisive issue for Republican candidates.

“We can’t let them get away with it,” Trump said. Then, he added, referring to Lake and her rejection of the 2020 results: “I think it’s one of the reasons she’s doing so well.”

But as popular as the former president remains with the core of the GOP’s base, his involvement in races from Arizona to Pennsylvania — and his inability to let go of his loss to Biden — has veteran Republicans in Washington and beyond concerned. They worry that Trump is imperiling their chances in what should be a highly advantageous political climate, with Democrats deeply divided over their policy agenda and Americans taking a generally pessimistic view of Biden’s leadership a year into his presidency.

Sen. Mitch McConnell, the Republican leader, and other senior party officials have expressed their misgivings in recent days about Trump’s fixation on the last election, saying that it threatens to alienate the voters they need to win over in the next election in November.

Those worries are particularly acute in Arizona, where the far-right, Trump-endorsed candidates could prove too extreme in a state that moved Democratic in the last election as voters came out in large numbers to oppose Trump. The myth of widespread voter fraud is animating Arizona campaigns in several races, alarming Republicans who argue that indulging the former president’s misrepresentations and falsehoods about 2020 is jeopardizing the party’s long-term competitiveness.

“I’ve never seen so many Republicans running in a primary for governor, attorney general, Senate,” said Chuck Coughlin, a Republican consultant who has worked on statewide races in Arizona for two decades. “Usually you get two, maybe three. But not five.”

At the rally on Saturday, every speaker who took the stage before Trump repeated a version of the false assertion that the vote in Arizona in 2020 was fraudulent. Gosar, the congressman, did so in perhaps the darkest language, invoking the image of a building storm, a metaphor commonly used by followers of the QAnon conspiracy theory. And he called for people involved in counting ballots in Arizona in 2020 to be imprisoned.

“Lock them up,” Gosar told the crowd. “That election was rotten to the core.”

For Republicans who are concerned about Trump’s influence on candidates they believe are unelectable, the basic math of such crowded primaries is difficult to stomach. A winner could prevail with just one-third of the total vote — which makes it more than likely a far-right candidate who is unpalatable to the broader electorate can win the nomination largely on Trump’s endorsement.

Conservative activists in Arizona have long supplied Trump with the energy and ideas that formed the foundation of his political movement. In 2011, when the real estate developer and reality television star was testing the waters for a possible presidential campaign, his interest in the conspiracy theories that claimed former President Barack Obama’s birth certificate was a forgery led him to Arizona Tea Party activists and a state legislator. They were pushing for a state law to require that political candidates produce their birth certificates before qualifying for the ballot. Trump invited them to Trump Tower.

One of those activists, Kelly Townsend, now a state senator, spoke to the crowd Saturday and praised those who sought to delegitimize Biden’s win.

Arizona has been a hotbed of distortions about the 2020 election. Allies of the former president demanded an audit in the state’s largest county, insisting that the official outcome had been compromised by fraud. But when the results of the review were released — in a report both commissioned and produced by Trump supporters — it ended up showing that he actually received 261 fewer votes than first thought.

Still, the myth lives on. And those who question it quickly become targets of the former president and his allies. They have attacked two prominent Arizona Republicans — Gov. Doug Ducey and state Attorney General Mark Brnovich for their roles in Arizona’s formal certification of its election results.

“He’s never going to get my endorsement, I can tell you that,” Trump said of Ducey.

Even those who have resisted going along with Trump’s false claims have been unable to completely duck the issue when faced with pressure from the president and his supporters.

When a group of 18 Republican attorneys general signed onto a far-fetched lawsuit from their counterpart in Texas that sought to delay the certification of the vote in four battleground states that Trump lost, Brnovich did not join his colleagues. He declared at the time that the “rule of law” should prevail over politics. But as a candidate for Senate who still occupies the office of the attorney general, he has investigated claims of fraud at the behest of Trump supporters.

As speaker after speaker attacked the credibility of the vote Saturday — those with Trump’s official imprimatur were announced as “Trump endorsed” — several also called on the state Legislature to retroactively vote to overturn Biden’s win. Trump’s allies said they expect the issue to take on more urgency in the coming weeks, even though it would have no legal or practical impact.

“Arizona is a red state,” said state Sen. Wendy Rogers, leading the crowd on a “Decertify” chant. “We are not turning purple.”