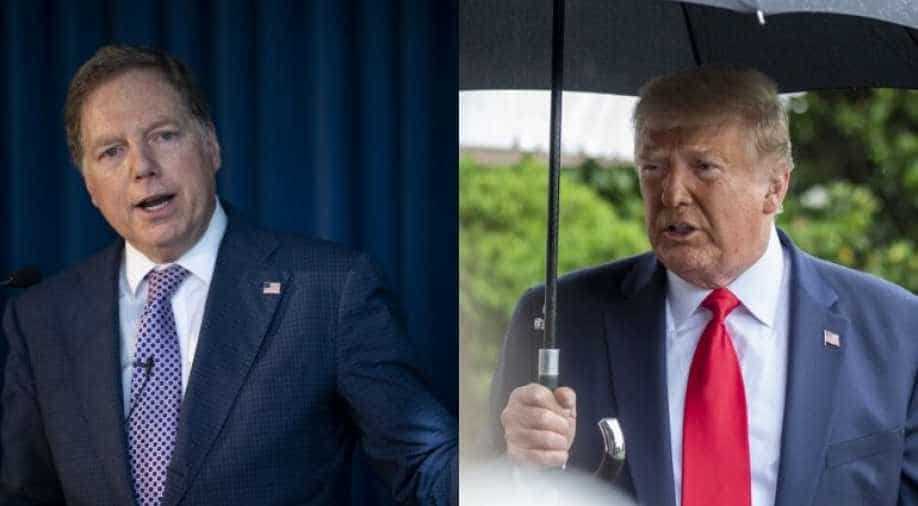 Berman, whose office has been investigating President Donald Trump's personal lawyer, Rudolph Giuliani, on Friday refused to step down after the administration abruptly said it was replacing him.

US President Donald Trump has denied any involvement in the firing of Geoffrey Berman. Geoffrey was a powerful prosecutor atop the Manhattan US Attorney's office and Trump clarified his stand after his attorney general sent Berman a letter saying the president had ordered to do so.

Also read: US prosecutor who has investigated Trump lawyer refuses to resign

Berman, whose office has been investigating President Donald Trump's personal lawyer, Rudolph Giuliani, on Friday refused to step down after the administration abruptly said it was replacing him.

"Unfortunately, with your statement of last night, you have chosen public spectacle over public service," Barr wrote in his letter to Berman. "Because you have declared that you have no intention of resigning, I have asked the President to remove you as of today, and he has done so."

While speaking to reporters, shortly after the letter was made public, Trump denied a kind of involvement in the case. He said: "That's his department, not my department." Trump added: "I'm not involved."

Geoffrey Berman released a statement a few hours later saying that he will exit his post.  "In light of Attorney General Barr's decision to respect the normal operation of law and have Deputy US Attorney Audrey Strauss become Acting US Attorney, I will be leaving the US Attorney's Office for the Southern District of New York, effective immediately," he said.

The dramatic standoff comes as Trump seeks to purge officials perceived as not fully supporting him. In recent weeks he has fired a series of agency watchdogs, including one who played a key role in Trump's impeachment earlier this year.

It also marks the latest in series of unusual actions by Attorney General William Barr that critics say are meant to benefit Trump politically and undermine the independence of the Justice Department.

Earlier in a surprise late-night announcement, Barr said the US Attorney in Manhattan, Geoffrey Berman, was stepping down and that he would nominate Securities and Exchange Commission Chairman Jay Clayton to take Berman's spot.

Berman, who leads a powerful office known for prosecuting high-profile terrorism cases, Wall Street financial crimes and government corruption, said he first learned of the move from Barr's press release and would not go quietly.

Berman said he had no intention of resigning.

Since being appointed in January 2018, Berman has not shied from taking on figures in Trump's orbit. His office oversaw the prosecution of Michael Cohen, Trump's former personal lawyer, indicted two Giuliani associates and launched a probe into Giuliani in connection with his efforts to dig up dirt on Trump's political adversaries in Ukraine.
Prosecutors have not accused Giuliani of wrongdoing.

Berman's abrupt attempted dismissal came as the Justice Department asks a federal court to block publication of a book by former National Security Adviser John Bolton, whose claims include an allegation Trump tried to interfere with a probe overseen by Berman's office.

Berman replaced Preet Bharara, who was himself fired as US Attorney in early 2017 soon after Trump became president.