Too salty: Canadian officials ask residents not to let moose lick their cars 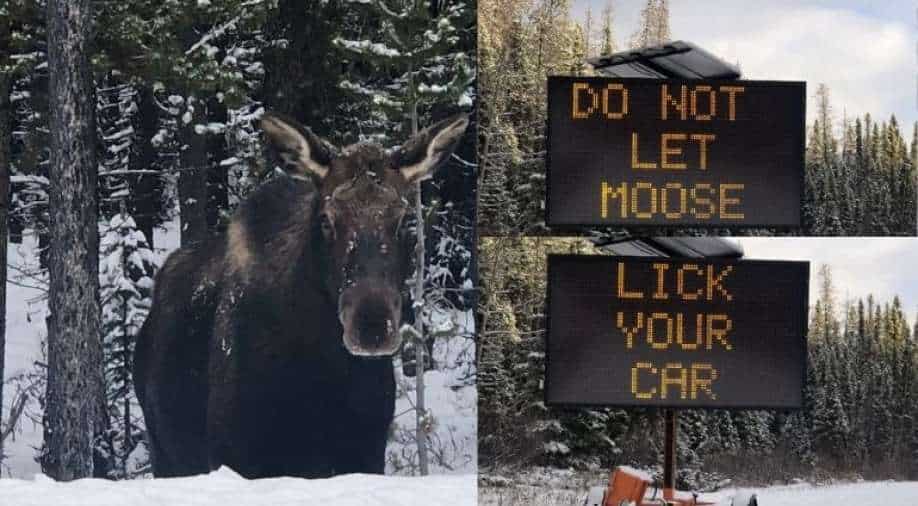 In a first, officials of Jasper, a town in Canada's Alberta province, are urging local residents to not let the wild moose lick the passing cars.

Local authorities of Jasper have put up flashing signs on the sides of the roads that read, "Do not let moose lick your car", urging cars and motorists passing by to resist letting moose indulge in the temptation.

The sign has been put up to make sure that the moose do not get habitual to being around cars and motorcycles in the area, as this poses a threat to the residents using the road, as well as the moose. Officials believe being around speeding cars can be dangerous for moose, and since moose are, sometimes, unpredictable, they can charge at the passing-by vehicles, posing a risk to residents' safety.

As per experts, Moose are obsessed with salt as it is one of the important minerals they need in their body. They usually get their daily intake from salt lakes in the park, but they get tempted to lick off the ice salt from the cars.

Onlookers usually park their cars along the roads waiting to catch a glimpse of the moose, who appear from time to time. Experts believe this can get Moose habitual to having cars around. "Moose and cars are not a good mix. If you hit the moose with your car, you take the legs out from under it and it's going through your windshield," Jasper National Park spokesman Steve Young told a media house.

Also read| Why does Canada celebrate Thanksgiving Day before US

Experts are urging people to drive away when they see moose arriving towards their vehicles, or softly blow the horn to scare the moose away.

"We've been seeing a lot more moose lately. The wolf population is decreasing, which means there's fewer predators and the moose population is going up as a result," Young said. "This also means people need to be respectful and give them space."

Onlookers are not allowed to feed the moose, or they could face a fine up to $25,000.