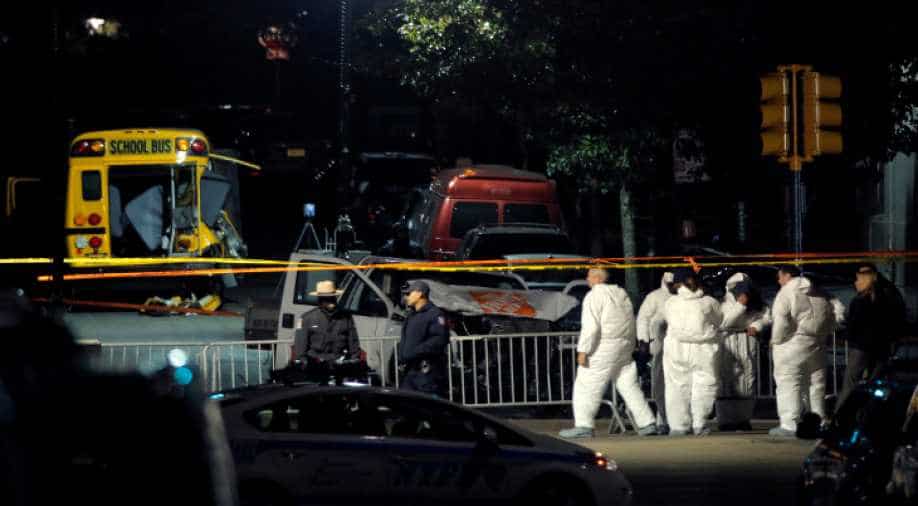 The police attends to the victims during the New York terror attack on Tuesday morning Photograph:( Reuters )

Eight people were killed and several were injured after a man in a rented truck mowed down pedestrians and cyclists on a bike path in New York City. Mayor Bill de Blasio stated this event a 'cowardly act of terror.'

It was the greatest loss of life from a suspected terrorist attack in New York since suicide hijackers crashed jetliners into the Twin Towers of the World Trade Center in lower Manhattan on September 11, 2001, killing more than 2,600 people

Below is a timeline of how the NYC terror attack unfolded on Tuesday afternoon:

3:05 PM (EST) - A driver in a rented pickup truck collided with pedestrians and cyclists on a bike path alongside the Hudson River, just a few blocks away from One World Trade Center in New York City on Tuesday. The driver reportedly got out of the truck with a pellet gun and a paintball gun. According to witnesses the suspect screamed  'Allahu Akbar,' law enforcement sources informed CNN.

4:46 PM (EST) - A source confirmed to ABC News that the event was being explored as potential terrorist attack.

5:23 PM (EST) - New York City Mayor Bill de Blasio called the attack a 'cowardly act of terror' while New York Governor Andrew Cuomo said it a 'lone wolf' attack and that there was no evidence to suggest it was part of a wider plot. Eight people were killed and 11 – including two children – were injured.

5:34 PM (EST) - The suspect was disclosed as 29-year-old Sayfullo Saipov, from Uzbekistan, who was an Uber driver. Saipov was shot in the abdomen by police on the spot and taken into custody and later underwent surgery. He reportedly came to the US legally in 2010 and has since been connected to Florida, New Jersey and Ohio.

The suspect in custody, named unofficially as Sayfullo Saipov, was an Uber driver, it has emerged. (Reuters)

8:31 PM (EST) -  According to reports from ABC News, the truck attack suspect Sayfullo Saipov left a note claiming that he had organised the attack on behalf of ISIS.

Argentina’s Foreign Ministry confirmed that a group of five friends from the country, who were in town celebrating the 30th anniversary of their high school graduation, were some of the victims of the terror attack others included Belgian national, Didier Reynders, an official from his country confirmed. A spokesperson for Schools Chancellor Carmen Farina informed that two staff members and two students were found wounded.

In NYC, looks like another attack by a very sick and deranged person. Law enforcement is following this closely. NOT IN THE U.S.A.!

My heart breaks for #NYC today. Thoughts & prayers as we monitor the situation.

Saddened by the tragedy in NYC. Our prayers are w/the victims, their families & first responders. Those responsible must be held accountable

Thanks NYPD for rapidly responding to tragic situation downtown. Worried & saddened to hear about injuries & loss of life.