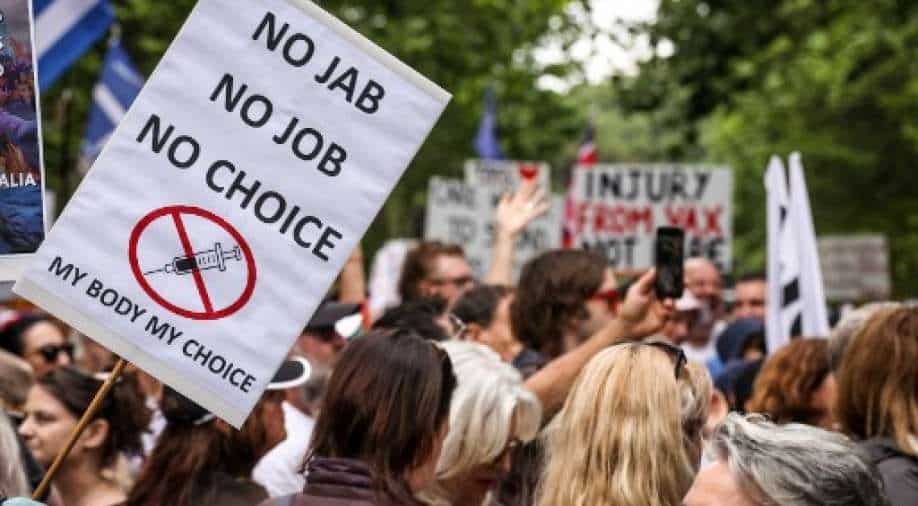 People attend a protest against lockdowns and vaccine mandates in Sydney Photograph:( AFP )

Citizens in Melbourne had spent over 260 days under lockdown amid a surge in coronavirus cases. Sydney had undergone a lockdown lasting for 106 days.

Protesters in Australia took to the streets on Saturday demonstrating against the COVID-19 vaccination mandate.

There were protests in Melbourne, Brisbane, Sydney and other cities even as the country has reportedly carried out vaccination among 85 per cent of the population.

The demonstrators hit out against COVID-19 restrictions for those who are unvaccinated although the protests were largely peaceful. There were also reports of pro-vaccination rally in some places with people urging citizens to take the jab.

Citizens in Melbourne had spent over 260 days under lockdown amid a surge in coronavirus cases. Sydney had undergone a lockdown lasting for 106 days as restaurants, pubs and cafes remained closed.

All shops and schools had closed in June in Sydney as authorities allowed only essential services to continue with a ban on travel for more than five kilometres applied to residents as the country struggled to battle against the Delta variant.

Amid the protests, Victoria on Saturday reported over 1,600 COVID-19 with five fatalities. New South Wales reported 182 coronavirus cases as the country continues to grapple with the virus. However, Australia has one of the lowest coronavirus cases, according to the World Health Organisation(WHO).

The Australian government had imposed a strict travel ban for over 18 months in a bid to keep the virus at bay but last month PM Scott Morrison declared that citizens will be able to return home since the vaccination rate had reached over 80 per cent.

The Australian government had imposed the world's toughest border restrictions as it grounded flights and did not allow its own citizens to come back even as the department of home affairs rejected thousands of requests from its citizens to enter or leave the country.

The vaccination debate has spilled over into the Australian Open as tournament chief Craig Tiley insisted that all players must be vaccinated in order to take part in the tournament.