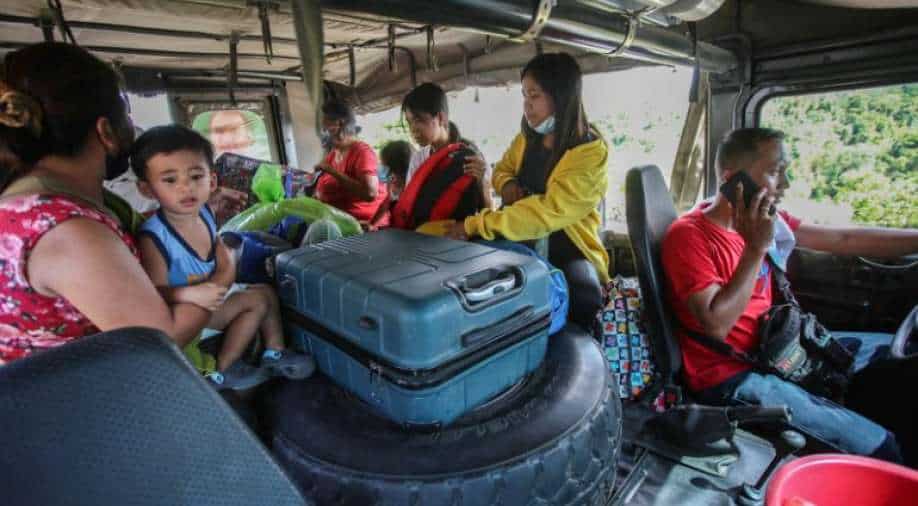 Residents living near Taal volcano ride a vehicle as they evacuate to a public school in Laurel, Batangas, on March 26, 2022, after an eruption earlier in the morning sent ash and steam hundreds of metres into the sky. Photograph:( AFP )

Residents in five fishing and farming settlements around the lake were ordered to leave their homes, in the third mass evacuation in as many years around one of the country's most active volcanoes

Thousands of people fled their homes near a Philippine volcano Saturday after an eruption sent ash and steam hundreds of metres into the sky.

Taal volcano, which sits in a picturesque lake south of Manila, exploded with a "short-lived" burst at 7:22 am (2322 GMT), the Philippine Institute of Volcanology and Seismology said in a statement.

It warned further eruptions were possible, which it said could trigger dangerous, fast-moving volcanic flows of gas, ash and debris, as well as a tsunami.

Residents in five fishing and farming settlements around the lake were ordered to leave their homes, in the third mass evacuation in as many years around one of the country's most active volcanoes.

"It rained mud," said Cornelia Pesigan, 25, who sought shelter at a school outside the seven-kilometre (4.3-mile) "danger zone".

"It smelled really bad and I had difficulty breathing," the mother-of-two added.

The initial eruption was followed by "nearly continuous phreatomagmatic activity" that sent plumes stretching 1,500 metres (4,900 feet) into the air, the seismological agency said, raising the alert level from two to three on a scale of zero to five.

A phreatomagmatic eruption happens when molten rock comes into contact with underground or surface water, said Princess Cosalan, a scientist at the agency, likening it to pouring "water on a hot pan".

Cosalan told AFP that ash and steam emissions had quietened in the hours after the initial burst, but said the institute's on-site sensors continued to detect volcanic earthquakes and another eruption was "possible".

The agency's chief, Renato Solidum, said the activity was weaker than in January 2020, when Taal shot ash 15 kilometres high and spewed red-hot lava, crushing scores of homes, killing livestock and sending tens of thousands into shelters.

"There is no threat beyond the... five villages," Solidum said.

More than 12,000 people live in the most vulnerable communities, according to the latest available official data.

Police have been deployed to stop people entering the high-risk zones, while aviation authorities warned airlines and pilots of potential hazards from volcanic ash in the atmosphere.

The Philippines is hit periodically by eruptions and earthquakes due to its location on the Pacific "Ring of Fire" -- a zone of intense seismic activity.

Access to the volcano island, which was once home to a community of thousands, has been prohibited since the 2020 eruption.

It belched sulphur dioxide for several days, creating a thick haze over the capital and surrounding provinces.

The alert level was lowered back to two before Saturday's eruption.