How Kosovo's 'restaurant bears' were rescued 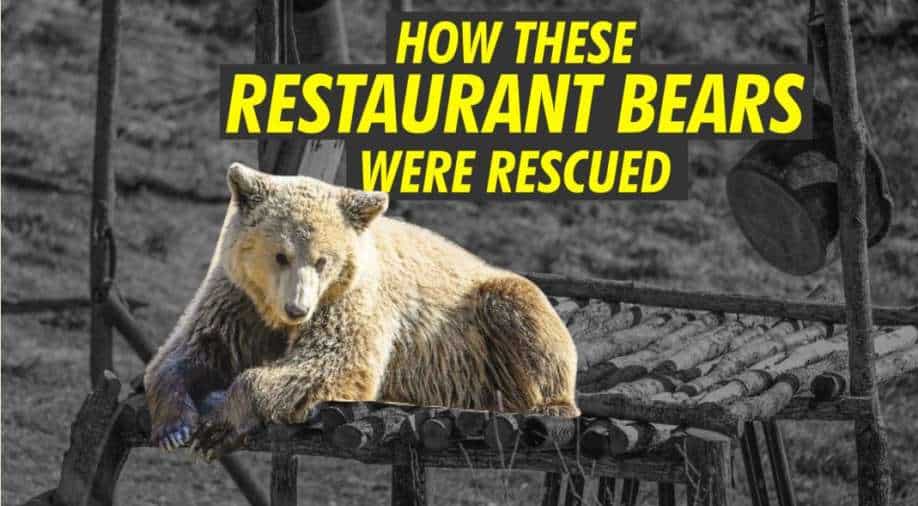 Cruelty to animals is something that we see everywhere around us. But this case took it to another level. These 'restaurant bears' were in really bad situation. Check out the video to know more.

After war-ravaged Kosovo and Serbia in late 1990s, a strange practice took root in Kosovo

Bears are nobody's idea of a pet. The ferocious animal is capable of killing a human being with just one slap of his claw. However, even with all its power, it is helpless before humans and their boundless cruelty.

After war-ravaged Kosovo and Serbia in late 1990s, a strange practice took root in Kosovo.

Bears were caught, chained up and crammed in cages near eateries for people's 'entertainment'. People would heckle the caged animal, even force it to drink alcohol.

The bizarre and cruel idea of 'fun' became widespread in Kosovo.

The bears were underfed, they were often abandoned after restaurant managers shut shop and moved business elsewhere. In such cases, the animals were forced to live in the cage for months, covered in its own excrement.

The horrific practice and sheer torture of these animals was noticed by NATO troops in 2011. These troops were stationed in Kosovo.

They alerted their embassy in 2011, who then urged local authorities to stop the practice.

Eventually, it was agreed that Austrian NGO Four Paws would create a refuge on land provided by the municipality of Pristina.

The harder part turned out to be rescuing the bears from their owners.

The tense operations were carried out under the protection of special police forces supported by KFOR soldiers, recalled Dardan Gashi, who was minister of the environment at the time and a key champion of the project.

"Some of the owners were members of the former (pro-independence) guerrillas, they thought they were invulnerable and imagined we wouldn't dare go there," he told AFP.

In one case, an owner "killed three bears before we arrived", Gashi added.

Rescue was just the first step. Some of these bears had become dependent on alcohol. They needed proper care, nutrition so that they could return to their natural diet.

A sanctuary was created in Pristina, Kosovo's capital, for these bears.

The site's core mission has been achieved -- since 2014, there have been no more cases of detained bears in Kosovo, said director Mahmuti, whose next project is to find a home for a lion and wolves that were held illegally.

The year before the pandemic, the site welcomed some 40,000 visitors, mostly families and students.

"It's a success story," said Milot Kurshumlia, a 39-year-old environmental activist who hopes it "won't be the last."