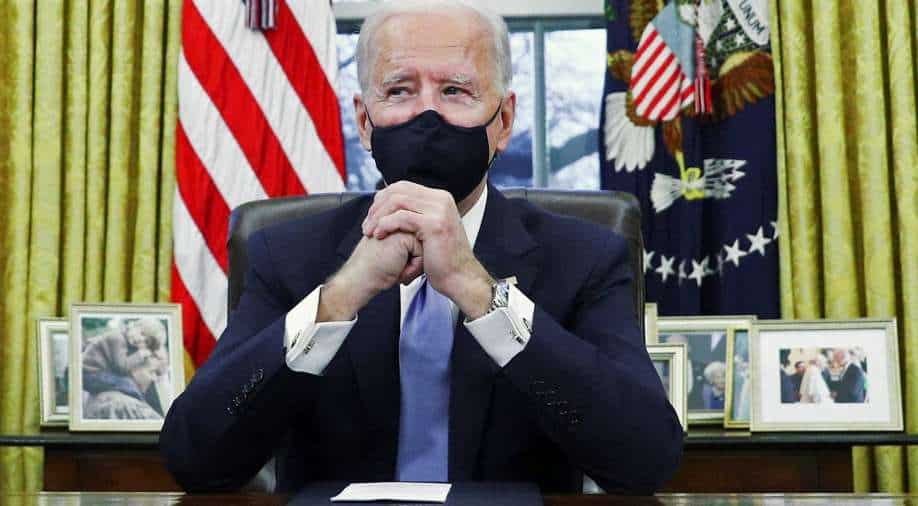 The passage of Trump’s 2017 tax bill and his appointment of three justices to the Supreme Court are clearly his most enduring accomplishments. But many of Trump’s other signature actions were enacted via executive fiat, making them especially vulnerable to rapid reversal the same way — by an executive order.

WASHINGTON — As President Donald Trump boarded the plane to Florida on Wednesday, he cast his achievements as sweeping, ambitious and, above all, enduring — a few hours before his successor began demolishing that legacy at breakneck speed.

“We’ve accomplished so much together,” Trump told a crowd of his supporters, ticking off what he believed to be his top policy successes on immigration, deregulation, veterans affairs and taxes — adding, “We were not a regular administration.”

The passage of Trump’s 2017 tax bill and his appointment of three justices to the Supreme Court are clearly his most enduring accomplishments. But many of Trump’s other signature actions were enacted via executive fiat, making them especially vulnerable to rapid reversal the same way — by an executive order.

President Joe Biden, a more experienced Washington operator, is not using the process to build his legacy, as Trump tried to do, but as a means of erasing Trump’s.

In his first 48 hours in office, Biden cranked out about 30 executive orders, of which 14 target a broad range of Trump executive mandates, with the remainder aimed at implementing emergency measures intended to deal with the pandemic and the economic crisis.

“I don’t think it’s fair to say that most of what Trump did can be undone in an afternoon. It’s going to take at least 10 days,” said John Podesta, a former adviser to President Barack Obama who lobbied for the targeted use of executive action in Obama’s second term when congressional Republicans blocked his environmental and immigration proposals.

“I think Trump sort of views Article II of the Constitution” — which details the powers of the presidency — “as making him omnipotent, and now he’s going to find out that except for cutting taxes, and maybe some of the foreign policy stuff, very little will actually last,” he added.

One former senior Trump aide, speaking on condition of anonymity for fear of retaliation, agreed. “Very little of what Trump did was done to ensure permanence. At the pace Biden is moving, everything Trump did will be gone by the time the sun rises on Monday — except his judicial appointments.”

The effort has its roots in a less focused campaign at the start of the Trump administration. Four years ago, during the transition, a Trump aide printed out the detailed checklist of Obama’s campaign promises from the official White House website with the goal, never quite achieved, of reversing every single one.

Trump’s allies said his stewardship of the economy, even after the pandemic, was his greatest legacy, an opinion shared by his aides who put together a list of about 1,000 accomplishments that has subsequently been scrubbed from the White House website.

The list is light on legislative achievements. Trump, who did not take the time to learn the levers of power, did not consistently engage with congressional leaders, beyond basking in their support or making last-minute demands to increase funding for his wall by threatening to scuttle big budget deals.

In a remarkable interview 10 days before his death in 1973, Lyndon B. Johnson, the most skilled legislator-president in the country’s recent history, explained why he had resisted the temptation to ram through landmark civil rights reforms by using executive orders.

Pursuing a legislative path was tougher and led to an uncertain outcome, but he wanted his reforms to endure, Johnson explained, and to do so they required the stubborn force of law.

Black leaders “wanted me to issue an executive order and proclaim this by presidential edict,” said Johnson, speaking of the Fair Housing Act of 1968 — an approach that, he concluded, “would not be very effective if the Congress had not legislated.”

If Trump needed a more contemporary lesson than Johnson’s, he only had to look back to his predecessor, Obama, who endured a protracted and messy process to pass the Affordable Care Act — a law that has endured, albeit weakened, despite Trump’s repeated efforts to destroy it.

For the first two years of his administration, Trump enjoyed majorities in both houses of Congress, affording him the opportunity to legislate on the issues he campaigned on: tightening immigration restrictions and building a border wall, repealing Obamacare, and restoring vitality to the economically ravaged Midwestern heartland.

But he never seriously tried to build consensus on immigration reform and opted instead for acting unilaterally on the issue, drafting a poorly executed ban on visitors from several Muslim and African countries during his first days in office, to the chagrin of seasoned counselors, like his first White House counsel, Donald McGahn, former aides said.

Instead, Trump became enthralled with the pageantry of issuing the executive orders, turning quotidian signing sessions into televised demonstrations of his power.

At the same time, Trump was frittering away opportunities to create a durable legislative legacy, walking away, without explanation, from initiatives like an ambitious infrastructure package that might have drawn broad bipartisan consensus and altered the trajectory of his presidency.

Two bills broke that mold — the tax cuts and the 2018 criminal justice reform bill, a measure that enjoyed strong support in both parties and became a main theme of the Republican National Convention when he was seeking to win the support of Black voters.

Sen. Mitch McConnell, the Republican leader — who has soured on Trump since the Jan. 6 riot at the Capitol — was responsible for a more enduring element of his presidency: the clever use of congressional riders to repeal some agency regulations, making them harder to repeal than the thousands of quickly reversible rule changes implemented by the president’s appointees.

Whether Biden will also become overly reliant on executive action remains an open question. But as a guide, some on Biden’s team are using a 140-page law review article from 2001 by Justice Elena Kagan of the Supreme Court, then a professor at Harvard Law School, which charts a middle course, supporting the use of executive power as a tool for regulatory efforts but not as a license to unilaterally dictate every action taken by presidential subordinates.

Two officials involved in the rollout of Biden’s orders said that his use of executive decrees was not a reflection of an expansive view of executive authority but rather a response to the pandemic and the damage done by Trump’s policies.

They said his use of executive actions would diminish when congressional action picked up.

On Friday, Brian Deese, a Biden economic adviser, said the administration’s top priority was passing a $1.9 trillion coronavirus relief package, but stopgaps included in the orders, like a potential minimum wage hike for federal employees and increased food assistance, were needed to keep the country from falling into “a very serious economic hole.”

But Biden seems to know that the path to completing his agenda runs through Congress, particularly the Senate, where he served for nearly four decades.