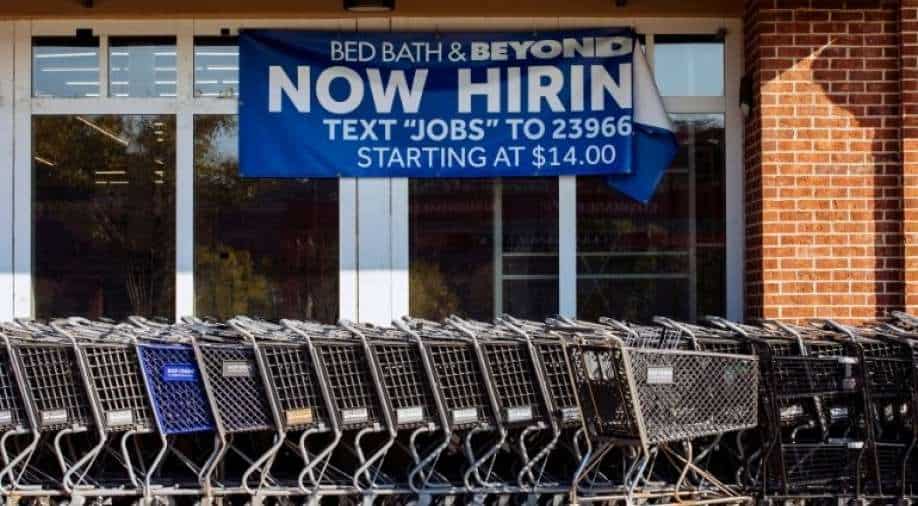 A sign advertises job openings at a Bed Bath & Beyond store in Atlanta Photograph:( The New York Times )

Conservatives have blamed generous unemployment benefits for keeping people at home, but evidence from states that ended the payments early suggests that any impact was small

Fall was meant to mark the beginning of the end of the labour shortage that has held back the nation’s economic recovery. Expanded unemployment benefits were ending. Schools were reopening, freeing up many caregivers. Surely, economists and business owners reasoned, a flood of workers would follow.

Instead, the labour force shrank in September. There are 5 million fewer people working than before the pandemic began and 3 million fewer even looking for work.

The slow return of workers is causing headaches for the Biden administration, which was counting on a strong economic rebound to give momentum to its political agenda. Forecasters were largely blindsided by the problem and do not know how long it will last.

Conservatives have blamed generous unemployment benefits for keeping people at home, but evidence from states that ended the payments early suggests that any impact was small. Progressives say companies could find workers if they paid more, but the shortages are not limited to low-wage industries.

Instead, economists point to a complex, overlapping web of factors, many of which could be slow to reverse.

The health crisis is still making it hard or dangerous for some people to work, while savings built up during the pandemic have made it easier for others to turn down jobs they do not want. Psychology may also play a role: Surveys suggest that the pandemic led many to rethink their priorities, while the glut of open jobs — more than 10 million in August — may be motivating some to hold out for a better offer.

The net result is that, arguably for the first time in decades, workers up and down the income ladder have leverage. And they are using it to demand not just higher pay but also flexible hours, more generous benefits and better working conditions. A record 4.3 million people quit their jobs in August, in some cases midshift to take a better-paying position down the street.

“It’s like the whole country is in some kind of union renegotiation,” said Betsey Stevenson, a University of Michigan economist who was an adviser to President Barack Obama. “I don’t know who’s going to win in this bargaining that’s going on right now, but right now it seems like workers have the upper hand.”

Rachel Eager spent last fall at home, taking the last class for her bachelor’s degree over Zoom while waiting to be recalled to her job at a New York City after-school program. That call never came.

So Eager, 25, is looking for work. She has applied for dozens of jobs and had a handful of interviews, so far without luck. But she is taking her time. Eager said she is still worried about catching COVID-19; she would prefer to work remotely, and if she does end up taking an in-person job, she wants it to be worth the risk. And she does not want another job with low pay, little flexibility and no benefits.

“Many, many people are realizing that the way things were pre-pandemic were not sustainable and not benefiting them,” she said.

She has been applying for jobs in data analysis, nonprofit management and other fields that would offer better pay, benefits and a sense of purpose.

Eager, who is vaccinated, said that she had always been careful with money and that she built savings this year by staying home and socking away unemployment benefits and other aid.

“My financial situation is OK, and I think that is 99% of the reason that I can be choosy about my job prospects,” she said.

Americans have saved trillions of dollars since the pandemic began. Much of that wealth is concentrated among high earners, who mostly kept their jobs, reduced spending on dining and vacations, and benefited from a soaring stock market. But many lower-income Americans, too, were able to set aside money thanks to the government’s multitrillion-dollar response to the pandemic, which included not only direct cash assistance but also increased food aid, forbearance on mortgages and student loans, and an eviction moratorium.

Economists said the extra savings alone are not necessarily keeping people out of the labor force. But the cushion is letting people be more picky about the jobs they take, when many have good reasons to be picky.

In addition to health concerns, child care issues remain a factor. Most schools have resumed in-person classes, but parents in many districts have had to grapple with quarantines or temporary returns to remote learning. And many parents of younger children are struggling to find day care, in part because that industry is dealing with its own staffing crisis.

Liz Kelly-Campanale left her job as a winemaker last year to care for her two children in Portland, Oregon. She thought about going back to work when schools resumed in-person instruction this fall. But the delta variant upended those plans.

“If you have an exposure, all of a sudden your kids are out of school for 10 days,” she said. “For people who have jobs where they can work from home, it’s maybe a little more feasible, but I can’t really drive a forklift around the house.”

Economists worry that if the pandemic leads many people to opt out of the workforce, it could have long-term consequences for economic growth. Rising labor force participation, particularly among women, was a major driver of the strong gains in income and production after World War II. Many economists argue that the reversal of that trend in recent decades has hurt economic growth.

In the shorter term, many economists think that more people will return to work as pandemic-related issues recede and as people deplete their savings.

“Eventually those savings, especially for lower-income people, they’re going to run out,” said Pablo Villanueva, an economist at UBS. “A lot of people are going to be increasingly unable to stay out of work even if they have some fear of COVID.”

Some businesses seem determined to wait them out. Wages have risen, but many employers appear reluctant to make other changes to attract workers, like flexible schedules and better benefits. That may be partly because, for all their complaints about a labor shortage, many companies are finding that they can get by with fewer workers, in some instances by asking customers to accept long waits or reduced service.

“They’re making a lot of profits in part because they’re saving on labor costs, and the question is, how long can that go on?” said Julia Pollak, chief economist for the employment site ZipRecruiter.

Eventually, she said, customers may get tired of busing their own tables or sitting on hold for hours, and employers may be forced to give in to workers’ demands.