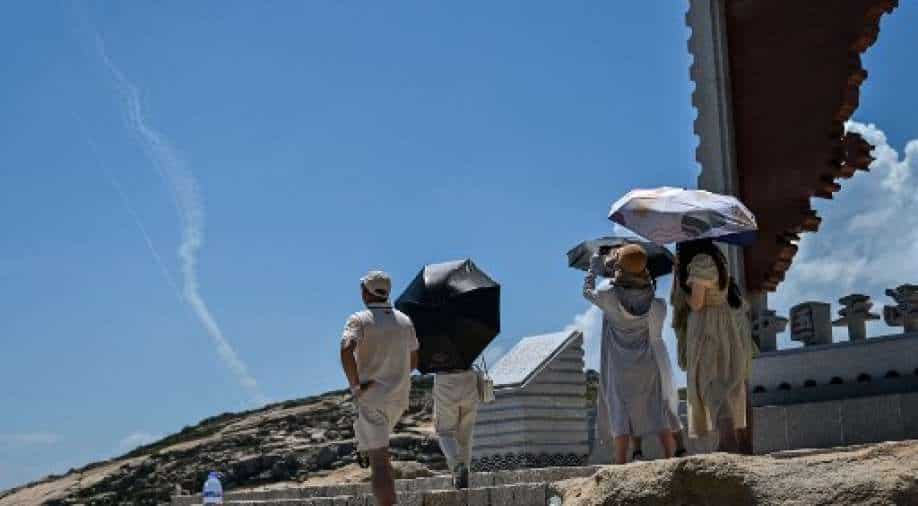 Smoke trails from projectiles launched by the Chinese military are seen in the sky as tourists look on from Pingtan Island, one of mainland China's closest point from Taiwan, in Fujian province on August 4, 2022. Photograph:( AFP )

US House Speaker Nancy Pelosi's trip to Taiwan angered Beijing and the military exercises are a fallout of her visit.

In a major show of force, China held its largest-ever military exercises around Taiwan on Thursday, a day after US House Speaker Nancy Pelosi's visit to the island nation. Taiwan's defence ministry has confirmed that the Chinese military launched missiles from near Taiwan's Matsu islands as part of these exercises. It has also deployed fighter jets and warships.

Talking about the type of missiles that were fired, Taiwan said that a total of 11 Dongfeng ballistic missiles were launched into waters near Taiwan's northern, southern and eastern coasts "in several batches". The last time China shot missiles into waters surrounding Taiwan was in 1996.

Taiwan has slammed the military exercises as "irrational actions that undermine regional peace".

Experts say that the exercises are aimed at testing a blockade of the island.

"The aim was to test the precision of the missiles and their ability to deny an enemy access to or control of an area," Eastern Theater Command spokesman Senior Colonel Shi Yi said in a statement.

China, apparently, plans to continue the military exercises till Sunday.

"In the face of this blatant provocation, we have to take legitimate and necessary countermeasures to safeguard the country's sovereignty and territorial integrity," foreign ministry spokeswoman Hua Chunying said at a briefing.