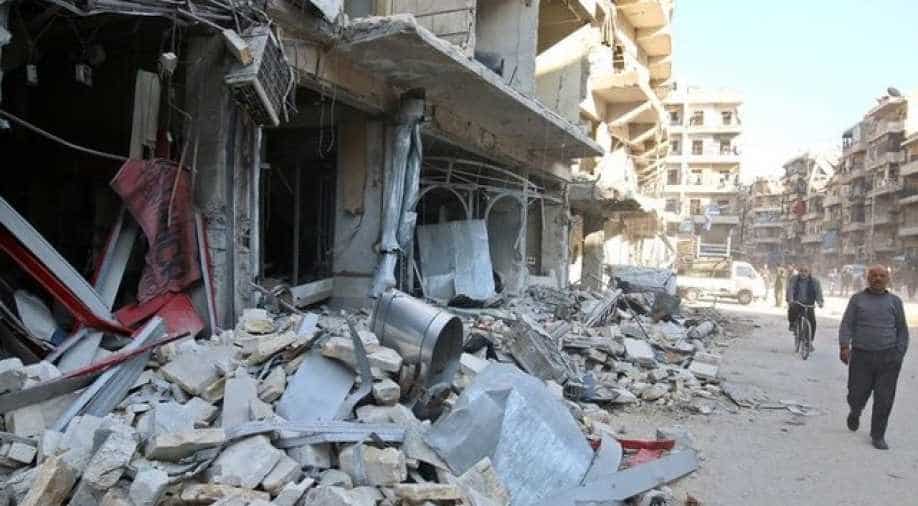 Many people continue to remain trapped under debris, the Syrian Observatory for Human Rights said. In photo: Shops damaged by airstrikes in rebel-held Aleppo on November 17. Photograph:( Reuters )

At least 32 people, including five children, were killed on Thursday as the Syrian regime continued to pound the rebel-held parts of Aleppo.

The Syrian Observatory for Human Rights, which is based in Britain, said the air strikes and artillery bombardment was one of the heaviest since the regime resumed its offensive on eastern Aleppo on November 15.

"There was an escalation in the evening, with successive bombardments," Observatory head Rami Abdel Rahman told AFP, adding that many people were trapped under rubble.

The eastern half of Aleppo is held by rebel groups who are supported by the United States and its allies.

At least 188 civilians, including 27 children, have been killed since the Syrian regime loyal to President Bashar al-Assad resumed its onslaught on eastern Aleppo.

Meanwhile, rebel fire has killed 16 civilians in the government-held west, including 10 children.

Aleppo has been a crucible of deadly bombings ever since the rebels took over the city. The situation in the city is dire as more than 250,000 are currently trapped with diminishing supply of essential commodities and ravaged medical services.

Over 300,000 people have been killed since war in Syria broke out in March 2011 in the aftermath of the Arab Spring.