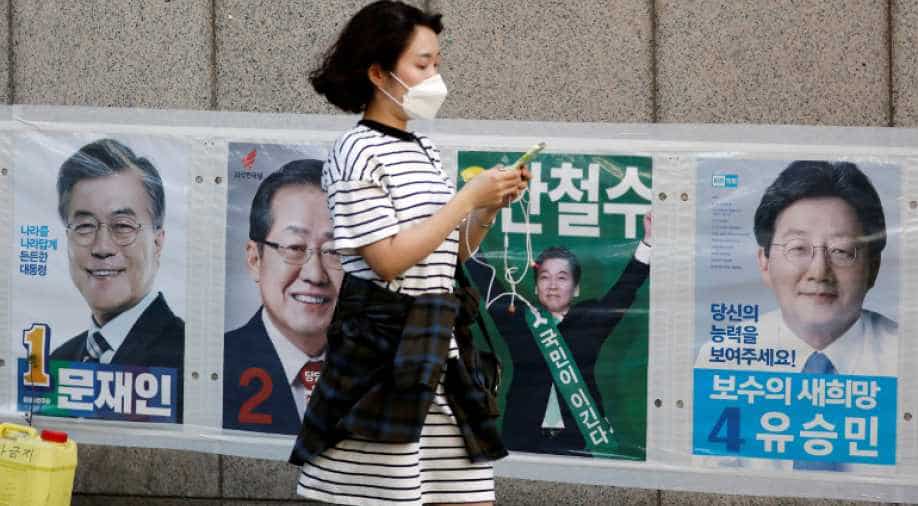 A woman holding her mobile phone walks past posters of candidates for the May 9 presidential election in Seoul. Photograph:( Reuters )

A Gallup Korea poll showed liberal Moon Jae-in with 38 per cent support in a field of 13 candidates, with centrist Ahn Cheol-soo his nearest challenger with 20 per cent. || The winner is expected to be sworn in on Wednesday, after the Election Commission releases the official result.

South Koreans go to the polls on Tuesday to elect a new leader, looking to move on from a corruption scandal that brought down former President Park Geun-hye and shook the political and business elite to the core.

Unless there is a major upset, liberal Moon Jae-in - who calls for a moderate approach on North Korea, wants to reform powerful family-run conglomerates and boost fiscal spending to create jobs - will be elected president.

The vote will end months of leadership vacuum. Park was ousted on charges of bribery and abuse of power in March to become South Korea's first democratically elected president to be forced from office. She is in jail, on trial.

Moon, who lost to Park narrowly in the last presidential election, in 2012, has criticised the two former conservative governments for failing to stop North Korea's weapons development. He advocates a two-track policy of dialogue while maintaining pressure and sanctions to encourage change.

A Gallup Korea poll published last Wednesday showed Moon with 38 per cent support in a field of 13 candidates, with centrist Ahn Cheol-soo his nearest challenger with 20 per cent.

A decisive win by Moon will provide much-needed stability and is expected to improve market sentiment at a time when robust exports have supported a recovery in Asia's fourth-largest economy.

The winner is expected to be sworn in on Wednesday, after the Election Commission releases the official result.

The election is being closely watched by allies and neighbours at a time of high tension over North Korea's accelerating development of weapons since it conducted its fourth nuclear test in January last year. It conducted a fifth test in September and is believed ready for another.

US President Donald Trump has vowed to stop North Korea developing a nuclear missile that can hit the United States.

North Korea would be keen to see a Moon victory. Its official Rodong Sinmun newspaper said in a commentary on Monday the time had come to put confrontation behind by ending conservative rule in the South.

"We as the same race should gather our strength to open a new era of independent reunification. To do so, the puppet conservative group’s move to remain in power should be definitely crushed," it said.

The new president will also face the challenge of defusing tension with China, which is angry about South Korea's decision to deploy a U.S. anti-missile system that China sees as a threat.

One in every four voters cast ballots in early voting last week and officials think higher participation by younger people could drive turnout to the highest in three decades.

Park had decided not to vote, despite having the right to do as she has not been convicted, media reported. An official at the detention centre where she is being held declined to comment, citing her privacy.