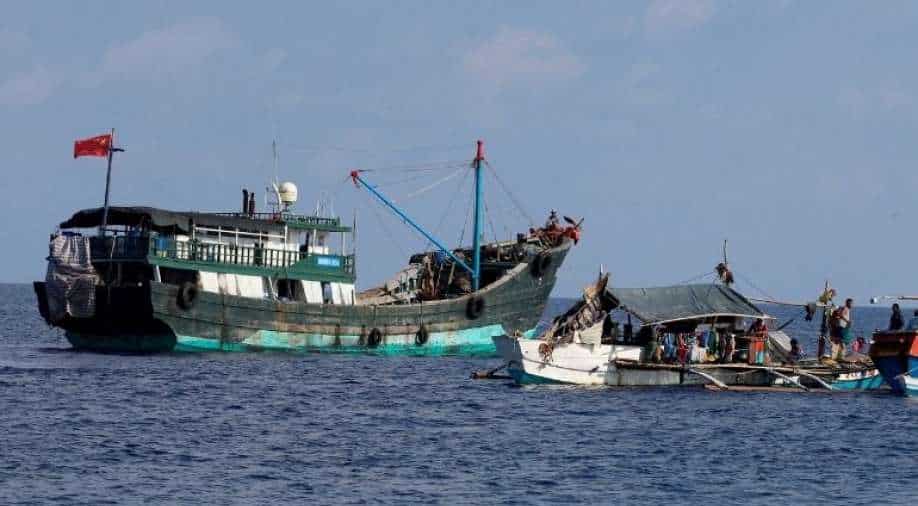 A Chinese fishing vessel is anchored next to Filipino fishing boats at the disputed Scarborough Shoal Photograph:( Reuters )

The comments by Teodoro Locsin, known for making blunt remarks at times, follow Manila's protests for what it calls the 'illegal' presence of hundreds of Chinese boats inside the Philippines 200-mile Exclusive Economic Zone

The Philippine foreign minister on Monday demanded in an expletive-laced message on Twitter that China's vessels get out of disputed waters, marking the latest exchange in a war of words with Beijing over its activities in the South China Sea.

The comments by Teodoro Locsin, known for making blunt remarks at times, follow Manila's protests for what it calls the "illegal" presence of hundreds of Chinese boats inside the Philippines 200-mile Exclusive Economic Zone (EEZ).

"China, my friend, how politely can I put it? Let me see… O…GET THE F*** OUT," Locsin said in a tweet on his personal account.

"What are you doing to our friendship? You. Not us. We're trying. You. You're like an ugly oaf forcing your attentions on a handsome guy who wants to be a friend; not to father a Chinese province…", Locsin said.

Chinese officials have previously said the vessels at the disputed Whitsun Reef were fishing boats taking refuge from rough seas.

The high-profile feud has escalated despite President Rodrigo Duterte's friendly stance toward China.

Both countries claim the rich fishing area, which China effectively seized in 2012 by surrounding it with its coast guard and surveillance ships after a tense standoff with Philippine vessels.

Philippine officials believe the Chinese vessels are manned by militia.

On Sunday, the Philippines vowed to continue maritime exercises in its EEZ in the South China Sea in response to a China demand that it stop actions it said could escalate disputes.

As of April 26, the Philippines had filed 78 diplomatic protests to China since President Rodrigo Duterte took office in 2016, foreign ministry data shows.

"Our statements are stronger too because of the more brazen nature of the activities, the number, frequency and proximity of intrusions," Marie Yvette Banzon-Abalos, executive director for strategic communications at the foreign ministry, said.

Duterte for the most part has pursued warmer ties with China in exchange for Beijing's promises of billions of dollars in investment, aid, and loans.

While the Philippine leader still considers China "a good friend", he said last week: "There are things that are not really subject to a compromise."

The escalating feud between Manila and Beijing started after more than 200 Chinese vessels suspected by Philippine authorities to be operated by militias were spotted in early March at Whitsun Reef.

The Philippine government demanded the vessels leave, then deployed coast guard vessels to the area. China said it owns the reef and the Chinese vessels were sheltering from rough seas.

Many of the Chinese vessels have left Whitsun, about 175 nautical miles (325 kilometers) west of the Philippine province of Palawan, but several have remained moored in the area, part of a shallow atoll partly occupied by China and Vietnam.

The Philippine government says the reef is within an internationally recognised offshore zone where Manila has exclusive rights to exploit fisheries, oil, gas and other resources.

The United States has said it will stand by the Philippines amid the territorial disputes.