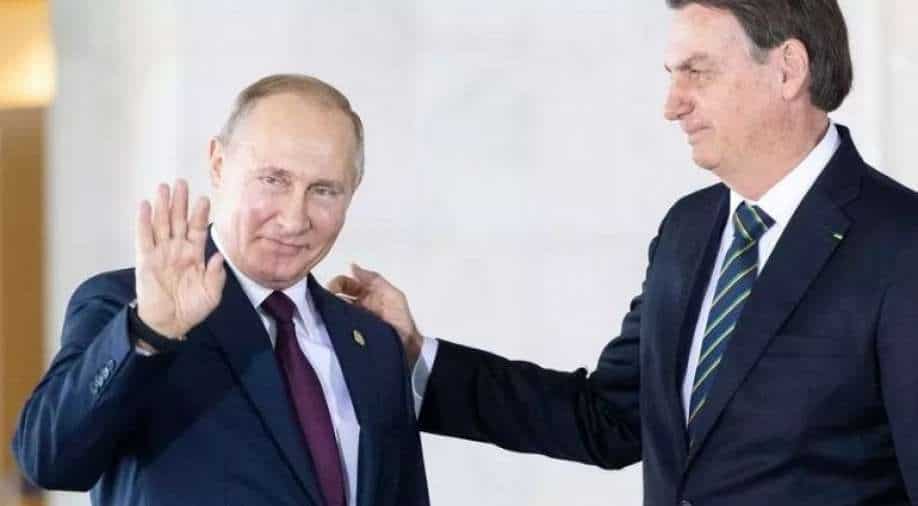 Other than sharing the speech, Bolsonaro also boasted of Putin's appreciation to a group of supporters present outside the presidential palace

Brazilian President Jair Bolsonaro was beaming on Wednesday after his Russian counterpart Vladimir Putin praised him a lot during BRICS summit, inviting a lot of jokes in the social media about the duo's "bromance".

"You were even infected personally by this disease, and withstood the ordeal with great courage," Putin said, according to the transcript shared by Bolsonaro on his official social media account.

"I know that moment must not have been easy, but you faced it like a real man and showed the best qualities of masculinity, such as strength and willpower."

Other than sharing the speech, Bolsonaro also boasted of Putin's appreciation to a group of supporters present outside the presidential palace.

"Anyone see the Russian president's speech yesterday? Did anyone catch that?" the Brazilian president said.

The incident led to the sharing of a lot of memes via social media.

After praise from Putin, Bolsonaro is looking for a language school to learn to speak "I love you" in Russian.🤡

Some people joked that Bolsonaro was apparently flirting with a new partner, referring to Putin post his "break up" with his political idol Donald Trump, after the latter was defeated in the presidential election.

Despite Putin's warm words, Bolsonaro has faced severe criticism for handling the coronavirus pandemic in the country that has killed over 166,000 people, second-highest globally.