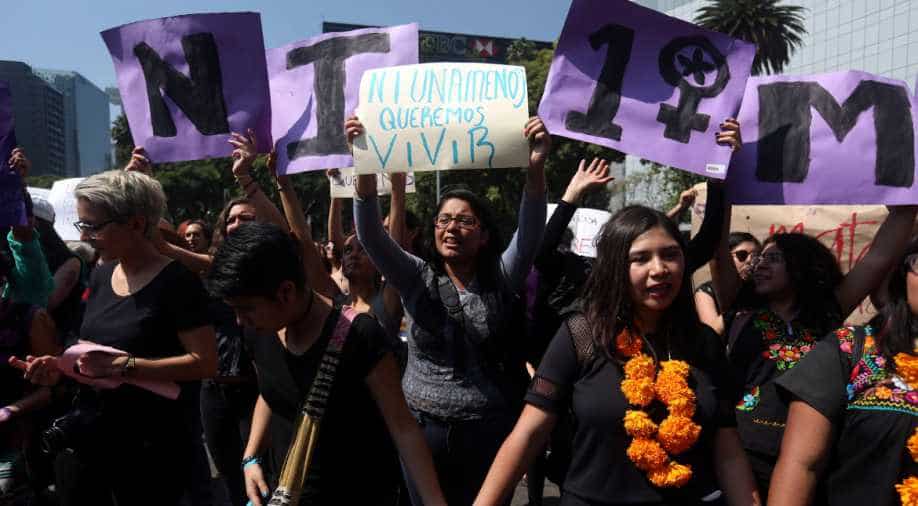 A man set fire to his ex-girlfriend's house in Uruguary, badly burning her and killing her three daughters and a friend. The case shocked the country. Photograph:( AFP )

Florencia was just 10 years old when her stepfather suffocated her with a plastic bag.

Lucia was 16 when two men drugged her, raped her and fatally impaled her on a spike.

Joseline was 22 when she was found strangled to death, her body covered in bruises.

They are three of the latest victims in a wave of horrific violence against women and girls that is stoking outrage in Latin America.

These three young women's countries -- Chile, Argentina and Mexico -- have, like much of the region, been swept by protests condemning domestic violence, machismo and what activists call a culture that values women less than men.

The movement is gaining momentum.

In Peru, President Pedro Pablo Kuczynski joined a protest in August that drew 50,000 people. Across the region, powerful labor unions and political parties are joining in.

"There is a change, and it's very important," said Lakshmi Puri, the deputy executive director of UN Women.

"This whole cry of zero tolerance is now catching on everywhere."

Puri compared what is happening in Latin America to her native India, where shock over the brutal gang rape and torture of a 23-year-old student unleashed a historic protest movement in 2012.

"It's that same outrage now that is being provoked by this gruesome and brutal violence that is perpetrated against women and girls" in Latin America, she told AFP.

She condemned the region's "culture of machismo," saying it fuelled the violence.

Of the 25 countries that register the most women's murders worldwide, half are in Latin America, she said.

Social networks
"It's tremendously dangerous to be a woman in Latin America," said Ariadna Estevez, a researcher in human rights at the National Autonomous University of Mexico.

Mexicans have been protesting violence against women for at least 20 years, she said -- starting with the brutal murders of hundreds of women and girls in Ciudad Juarez, on the US border.

But that movement was mainly confined to victims' friends and families.

Lately, there has been a broader, region-wide "wake-up call," she said.

In Argentina, the protests started last year with a movement called #NiUnaMenos (Not One Woman Less). Born on Twitter and Facebook, it has since spread to several other countries.

In Mexico, it is called the Violet Spring (#PrimaveraVioleta).

"It was also a form of catharsis," she said. "A lot of women had never talked about sexual harassment and the violence they had faced. You realize it's not just you, it's the majority of women."

That is the case in Brazil, where the hashtag #MeuPrimeiroAssedio (My First Harassment) has gone viral.

In Uruguay, where social worker Fanny Samuniski has been helping abused women for years, she says she has noticed a change.

"Now they arrive asking, What are my rights?" she said.

New generation
In Uruguay, one of the first countries in deeply Catholic Latin America to legalise divorce and abortion, 19 women have been killed by their partners or exes so far this year, activists say.

One case horrified the country in June, when a man set fire to his ex-girlfriend's house, badly burning her and killing her three daughters and a friend.

"Women are reporting (domestic violence) much more, but they still put up with it for 10 years first," said Samuniski.

Part of the problem, she said, is they often have no means to support themselves.

She is pushing for Uruguay to pass a law imposing harsher sentences for "femicide," as 16 Latin American countries have done.

Samuniski, who is nearly 80, said she has seen an awakening in the region.

"The women of my generation were much more timid. They (the younger generations) are fighters," she said.

Women today are "born and raised in another context," with more access to economic and educational resources, said Maria Nieves Rico, an Argentine who focuses on gender issues at the UN's Economic Commission for Latin America and the Caribbean.

Change in the region will take time, but "we are hearing their voices, and that always helps. Silence does not," she said.