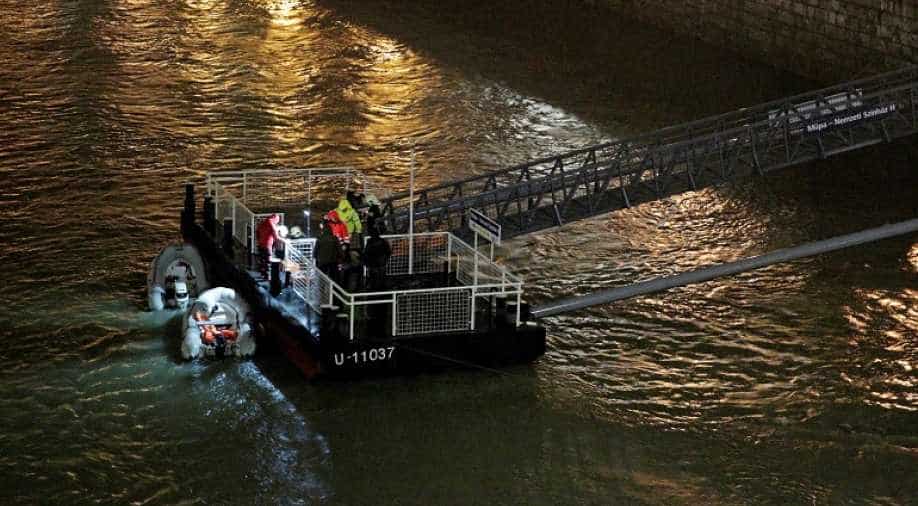 A rescue boat is seen on the Danube river after a tourist boat capsized in Budapest, Hungary, May 30, 2019. Photograph:( Reuters )

A total of 33 South Koreans were onboard, Seoul's foreign ministry said, confirming the seven dead were Korean.

Seven South Koreans have died and 19 others are missing after a tourist sightseeing boat capsized and sank on the Danube in Budapest, Hungarian and South Korean officials said Thursday.

The accident happened near the parliament building in the heart of the Hungarian capital after a collision with a larger river cruise boat during torrential rain at around 09:15 pm (1915 GMT) on Wednesday, according to local media.

A total of 33 South Koreans were onboard, Seoul's foreign ministry said, confirming the seven dead were Korean.

"Another seven people have been taken to hospital in a stable condition with hypothermia and shock symptoms," Gyorfi added.

The temperature of the river is between 10 and 15 degrees, according to local media.

Searches with the help of divers continued through the night for the missing, said officials.

Heavy rainfall since the beginning of May has led to high water levels and fast-moving river current, complicating rescue efforts.

The accident happened on a popular part of the Danube river for pleasure trips, from where passengers can view the city and its parliament building
illuminated at night.

The boat was regularly serviced and had no apparent technical faults, Mihaly Toth, a spokesman for Panorama Deck that owned the vessel, told the Hungarian news agency MTI.

"It was a routine sightseeing trip," said Toth.

"We know nothing about how it happened, the authorities are investigating, all we know is that it sank quickly," he said.

An eye-witness told the Index.hu news-site that the Mermaid, which could hold 60 people on board, had been hit from behind by a large river cruise boat.

The wreckage of the Mermaid was found on the riverbed after several hours of searching near the Margaret Bridge, one of the main bridges connecting the two parts of the Hungarian capital, local media said.

Access to the river has been blocked by the authorities, according to public television.

South Korea's President Moon Jae-in had instructed the government to "deploy all available resources" for the rescue, the presidential office said.

Embassy staff have also been assisting the emergency services in the identification of victims.

The Hungarian interior and health ministers visited the scene to express condolences to the families of the victims.