School out for 300,000 Chicago students as teachers strike 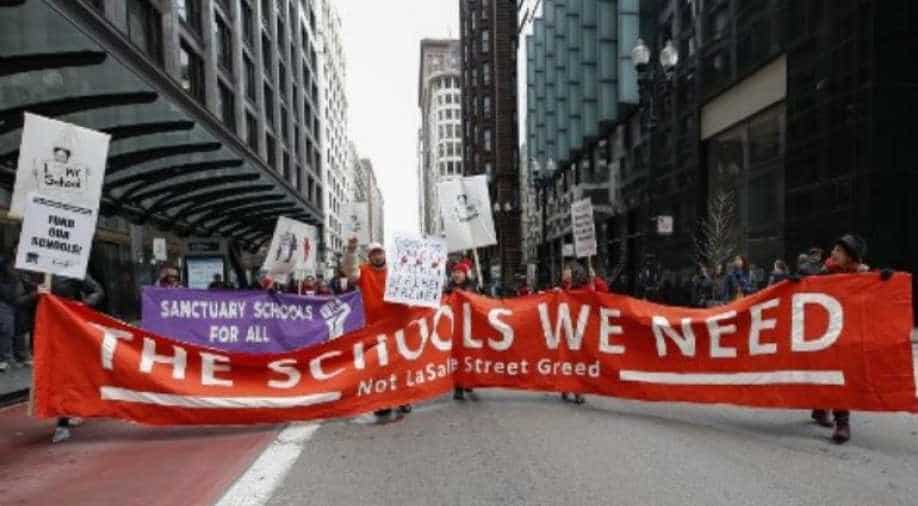 Teachers and supporters gather for the rally on the first day of the strike by the Chicago Teachers Union in Chicago, Illinois. Photograph:( AFP )

At the heart of the dispute is class sizes and resources rather than pay, with teachers saying they want more social workers, nurses and librarians for their students.

More than 32,500 teachers and other staff walked off the job Thursday in Chicago, cancelling classes for 300,000 students in nation's third-largest school district.

At the heart of the dispute is class sizes and resources rather than pay, with teachers saying they want more social workers, nurses and librarians for their students.

And they want a three-year contract instead of being locked into the current offer of a five-year deal.

Mayor Lori Lightfoot said she was disappointed the Chicago Teachers Union walked out despite the city's offer of what she called a "historic package."

The union had already spent a month negotiating with the mayor's team without an agreement, leading to the first teachers strike in the city since 2012.

One teacher on the South Side said having a nurse at school only one day a week was dangerous.

"Every school should have a nurse five days a week," said the teacher who asked to remain anonymous.

"Not having a nurse is dangerous for kids with asthma and other conditions."

Kathe Myers, who has been teaching in the third-largest US city for 24 years, said teachers did not have the expertise to take on more than one role.

"Our kids are traumatised. It's no secret that this is a violent city. So they bring all of that to school with them and we try to deal with that, but we aren't the experts in those fields," she added.

"Trying to do that and teach a full class is almost impossible."

Lightfoot has acknowledged schools need support staff, but the union wants to get an agreement in writing.

Teachers also say they are concerned about the lack of preparation time they get for writing lesson plans, grading assignments and administrative work.

The Chicago Public Schools district, which had been dealing with a budget crisis, was recently buoyed by significant new state funding of $1.9 billion.

The union says the cash has resolved the district's structural deficit, but the district says it is still carrying $8.4 billion in long-term debt and is forced to borrow to meet day-to-day obligations.

Lightfoot told a news conference she hoped for a short strike but had to keep the city's taxpayers in mind.

"We don't have unlimited resources," she said, and called the city's offer a "fair and generous compensation package."

The union said negotiations continued Thursday as members demonstrated outside schools and downtown.

Lightfoot said that while there would be no lessons, schools would be open during the action and staffed by non-union personnel.