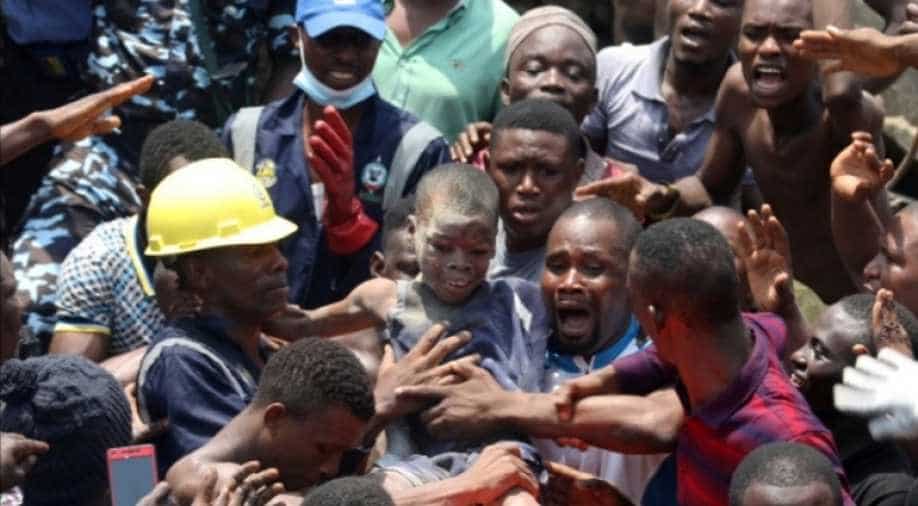 A boy is rescued from the collapsed school building. Photograph:( Reuters )

At least 10 young children are trapped. Rescuers are trying to reach them through the damaged roof.

At least 10 young children were trapped when a four-story building collapsed in a densely-populated area of Lagos Wednesday, and rescuers were trying to reach them through the damaged roof.

The children were attending a nursery and primary school on the top floor of the residential building when the structure collapsed. Police said they believed scores of people were trapped under the rubble.

The incident took place near Itafaji market on Lagos Island at around 10:00 am (0900 GMT).

In chaotic scenes, thousands of people thronged the area as police and rescue workers sought to rescue the victims.

A young man helping rescue efforts who gave his name only as Derin said "at least 10 children" were trapped inside but "thought to be alive."

Police said the overall number of people inside was likely much higher.

"We are still trying to find out how many are trapped inside" but probably scores of people said police officer Seun Ariwyo.

He said "at least 20 have been brought out" but did not say whether they were alive or dead.

An AFP reporter at the scene saw at least eight people pulled from the wreckage, including a small boy with blood on his face. Covered in dust, he was alive but unconscious and appeared to be badly hurt.

Building collapses are tragically common in Nigeria, where building regulations are routinely flouted.

In September 2014, 116 people, 84 of the South Africans, died when a six-story building collapsed as a celebrity televangelist was preaching.

An inquiry found the building had been built illegally and had structural flaws.

In December 2016, at least 60 people were killed when a roof fell in on a church in Uyo, the capital of Akwa Ibom state, in the east of the country.