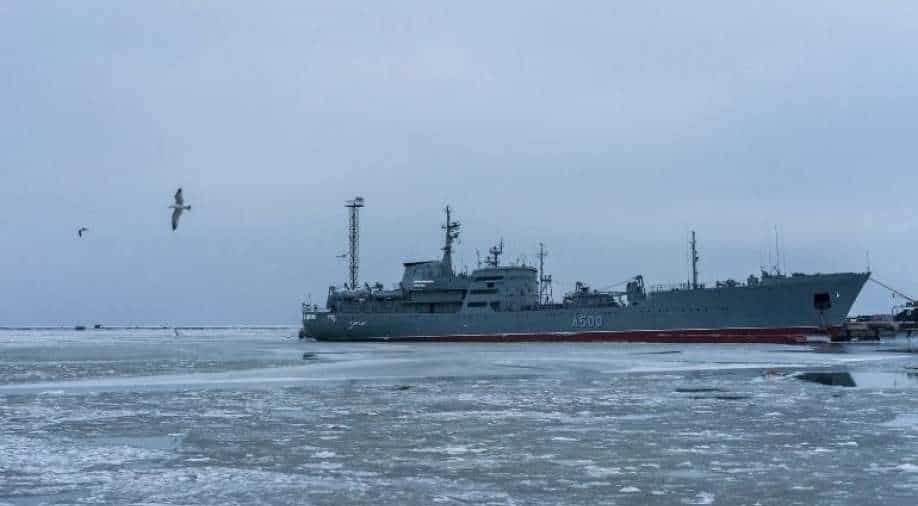 A lumbering ship may not yet be enough to provoke a full-on Russian assault. But with Moscow having amassed nearly 100,000 troops on Ukraine’s borders, along with tanks, fighter aircraft and ballistic missiles, people on all sides of the conflict are jumpy

It is a sign of the heightened tensions between Russia and Ukraine that for a few hours this week, а meandering, half-century-old Ukrainian naval ship seemed like it could spark a worrisome military escalation.

The ship, according to Ukrainian officials, was unarmed and involved in a simple training exercise Thursday in a small but strategic waterway bordered by Ukraine to the west and Russia to the east. It seemed to be primarily an example of the Ukrainian navy’s decrepitude, although it’s possible that Ukraine, too, could have been trying to push the boundaries and provoke Russia.

Either way, the Russian security services and state news media quickly seized on the encounter, portraying it as an imminent threat.

Russia’s domestic spy service, the FSB, announced late in the evening that it had intercepted the ship for failing to obey orders. That set off the Kremlin’s propagandists, who played up the move as a prelude to war. RT, a Russian government television station, began livestreaming coverage on YouTube under the headline “UKRAINIAN PROVOCATION,” with a military analyst suggesting the ship should be blown out of the water.

“This is the provocation everyone has been waiting for,” Andrei Medvedev, an RT contributor wrote.

In the end, it was not, as the vessel returned to port without incident.

A lumbering ship may not yet be enough to provoke a full-on Russian assault. But with Moscow having amassed nearly 100,000 troops on Ukraine’s borders, along with tanks, fighter aircraft and ballistic missiles, people on all sides of the conflict are jumpy.

The brief flare-up not only underscores the dangers inherent in the conflict between Ukraine and Russian-backed separatists, but also suggests that the situation remains volatile even after a video call this week between President Joe Biden and President Vladimir Putin of Russia aimed at ratcheting down tensions.

Putin’s rhetoric on Ukraine has become increasingly ominous. And Ukrainian troops are arrayed along a 250-mile barricade of trenches and fortifications that regularly erupts in machine gun and artillery fire as they face off against the separatists in the Donbass region of eastern Ukraine.

Much is riding on diplomatic efforts in the next days and weeks, experts said.

“I think that it’s obviously tense, but it’s not like we’re ready to roll,” said Eugene Rumer, director of the Russia and Eurasia Program at Carnegie Endowment for International Peace.

Rumer raised the possibility that, once Russia makes the decision to invade, it could use a minor incident as justification.

“If Putin realizes this conversation with Biden is not going anywhere, that he’s not getting what he wants, that this is hopeless, then I can imagine that a drone incident or a shell that somebody lobs could provide the pretext to pull the trigger,” he said.

Indeed, the decision by the FSB to intercept a seemingly harmless ship, combined with the furious reaction from the Kremlin’s propagandists, has unnerved Ukrainian and Western officials, who fear that it serves as a model for how the Kremlin could use a contrived excuse to invade.

Ukrainian observers said they found the timing of the FSB’s announcement suspicious. It came out around the time the government released the details of a telephone call between Ukraine’s president, Volodymyr Zelenskyy, and Biden.

In a statement on Twitter, the U.S. Embassy in Kyiv delivered an unusually pointed response, saying that the Ukrainian ship did nothing illegal and accusing the Russian government of intentionally ginning up a controversy.

“Russia’s false allegations are part of its ongoing campaign to distract from its latest aggressive, provocative action,” the embassy wrote.

The ship — ironically named Donbass, the heart of the separatist territory — was intercepted in the Sea of Azov near the Kerch Strait, a narrow passage near Russian-occupied Crimea over which Ukraine and Russia have repeatedly clashed. In 2018, Russian forces opened fire on several Ukrainian naval vessels and arrested a number of sailors, whom they accused of straying into territorial waters that the Kremlin claimed as its own after the annexation of Crimea.

The FSB said the Donbass had refused to obey orders to divert from a course leading to the Kerch Strait. “These actions represent a threat to the safety of navigation,” its statement said.

According to Ukrainian officials, the ship never came closer than 18 nautical miles from the disputed waterway.

Ukrainian and Western officials say that Russian authorities, including Putin, seem to be previewing their rationalizations for an invasion. This month, Secretary of State Antony Blinken warned that Russia had “intensified disinformation to paint Ukraine as the aggressor to justify pre-planned military action.”

These efforts appeared to continue even after the video call between Putin and Biden.

In defiance of all evidence to the contrary, Putin on Thursday accused Ukrainian authorities of carrying out “a genocide” against the residents of the Donbass. Although civilians in the separatist territories live under the protection of Russian-backed military forces, Margarita Simonyan, editor-in-chief of RT and one of the Kremlin’s chief propagandists, immediately amplified the claims, suggesting she hoped Russia would come to the residents’ rescue.

“Mother Russia has more than once saved millions from different forms of genocide,” she wrote on Telegram.

“I don’t know if he had that in mind,” she said of Putin, “but I certainly hope he did.”

The bellicose statements come against the backdrop of continuing violence along the so-called line of control separating Ukrainian forces and Russian-backed separatists. On Thursday, two Ukrainian service members were wounded in attacks on front-line positions, the country’s military press service reported.

Meanwhile, the buildup of Russian troops on the border shows no sign of abating. Russia’s Defense Ministry announced that tank divisions from the western military district had practiced taking out anti-tank rockets similar to the Javelins provided by the United States and now deployed by Ukrainian forces in the country’s east. The exercises were held at training grounds in the Voronezh region, less than 200 miles from the Russia-Ukraine border.

Valery Gerasimov, chief of the Russian General Staff, warned in remarks to military attachés Thursday that worsening tensions in the region could force Russia to respond. In his statement, he specifically mentioned Russia’s opposition to the Javelins, which Ukrainian forces have not yet used on the battlefield, as well as Turkish-made Bayraktar drones, which have been used to attack separatists positions.

“Any provocation by the Ukrainian authorities to solve the problems of Donbass using force will be suppressed,” he said.