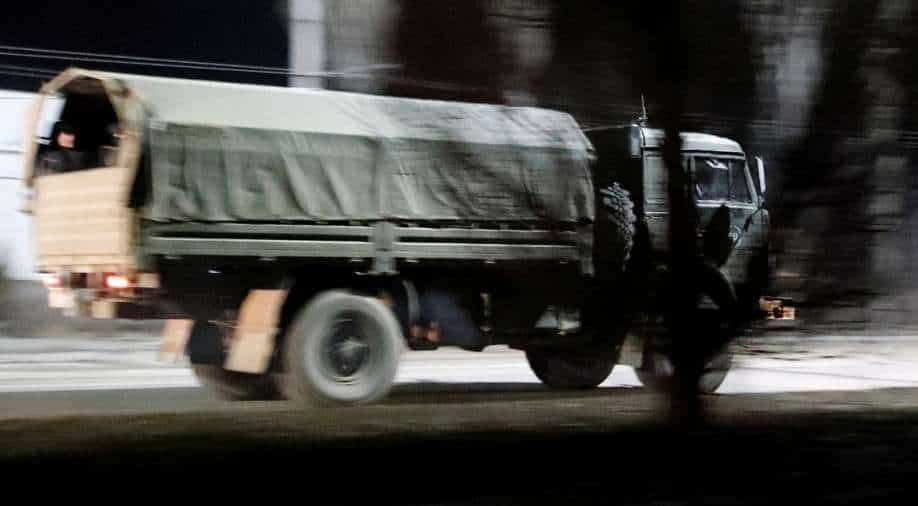 A military truck drives along a street after Russian President Vladimir Putin ordered the deployment of Russian troops to two breakaway regions in eastern Ukraine following the recognition of their independence, in the separatist-controlled city of Donetsk, Ukraine February 22, 2022. Photograph:( Reuters )

Ukrainian Minister of Foreign Affairs Dmytro Kuleba said in a tweet, "Putin has launched a full-scale war against Ukraine" .

Moments after that, a CNN correspondent reported that he heard sounds of explosions from Kharkiv. He later informed citing the Ukrainian interior ministry that explosions near Kyiv were missile strikes.

AFP correspondents in both cities heard powerful blasts and in Mariupol, close to the frontline and the Russian border, residents reported hearing artillery in the city's eastern suburbs.

Here's a video of explosions.

Meanwhile, Ukrainian Minister of Foreign Affairs Dmytro Kuleba said in a tweet, "Putin has launched a full-scale war against Ukraine."

"Strikes continue on peaceful Ukrainian cities. This is a war of aggression. Ukraine will defend and win. The world can and must stop Putin. It's time to act - just now," he added.

Ukraine Representative to Russian Representative at UN emergency meeting said, "Russian President on record declared war...It's the responsibility of this body to stop this war. I call on everyone to stop the war. "Should I play the video of your president calling the war."