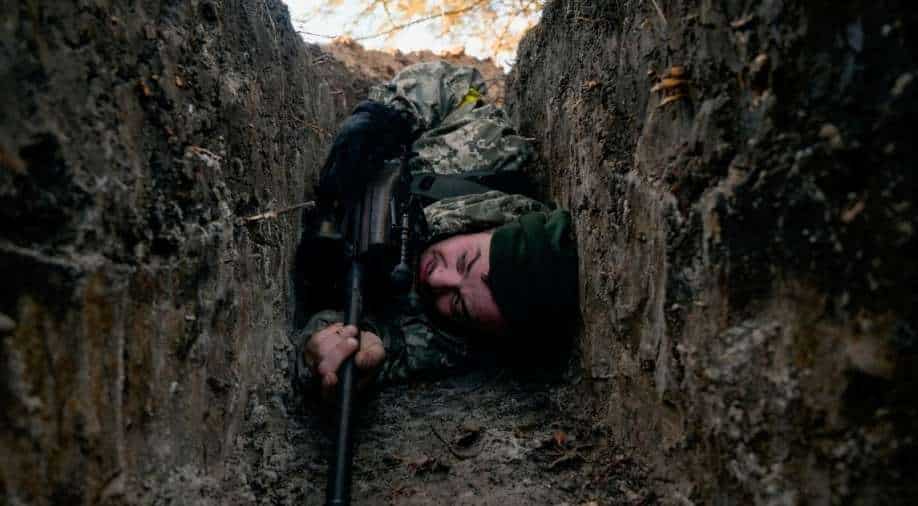 A Ukrainian soldier hides from a helicopter airstrike amid Russia's invasion of Ukraine, near Demydiv, Ukraine March 10, 2022. Photograph:( Reuters )

As per news agencies, shelling was also reported Friday in Lutsk, a city in north-western Ukraine

As the Russia and Ukraine conflict continues to escalate, a civilian area has apparently been targeted by the Russian shelling in the central Ukrainian city of Dnipro on Friday (March 11).

The emergency services have said that this appeared to be the first direct attack on the city. Reports have emerged that at least one person has been killed. Identity has not been confirmed.

In a statement, the emergency services noted: "There were three airstrikes on the city, namely hitting a kindergarten, an apartment building and a two-story shoe factory, starting a fire. One person died."

The strikes Ukraine had warned that Russia was mustering forces to encircle Dnipro, home to about one million people before the invasion started.

The strikes came amid preparations by the United States, together with the Group of Seven nations and the European Union, to revoke Russia's "most favoured nation" status over its invasion of Ukraine.

As per news agencies, shelling was also reported Friday in Lutsk, a city in north-western Ukraine. Lutsk mayor Ihor Polishchuk wrote on Facebook, "Explosions at the airport side."

The Russian defence ministry said in a briefing on Friday that its troops targeted airports in Lutsk and Ivano-Frankivsk, another western Ukrainian city some 250 kilometres south of Lutsk.

"Military airfields in Lutsk and Ivano-Frankivsk have been put out of order," ministry spokesman Igor Konashenkov said.