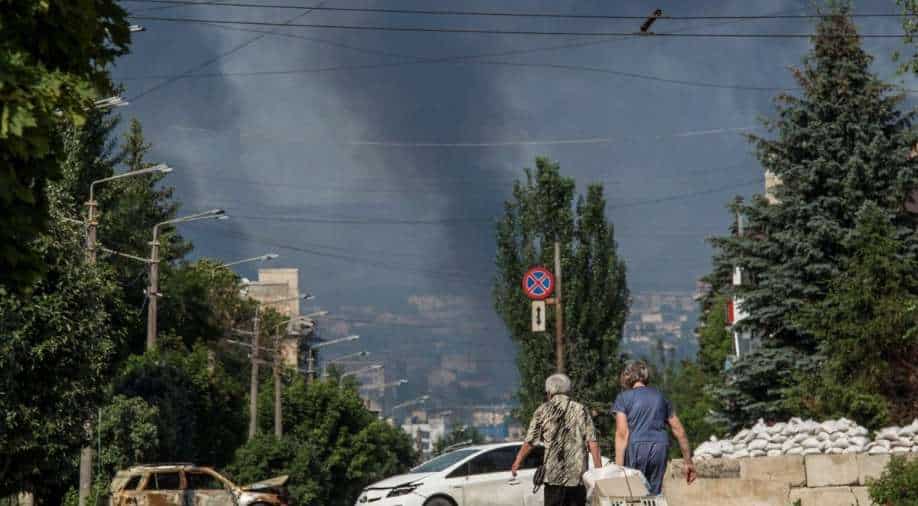 Local residents walk along an empty street as smoke from shelling rises in the background, amid Russia's attack on Ukraine, in the town of Lysychansk, Luhansk region, Ukraine June 10, 2022. Picture taken June 10, 2022. Photograph:( Reuters )

In the aftermath of Russia's invasion of Ukraine, the United States and other Western allies have supplied aid to Ukraine and provided the war-torn nation with weapons to counter Russia

Russia claims to have destroyed a large depot with US and European weapons in Ukraine using Kalibr cruise missiles, news agency Reuters reported on Sunday (June 12) citing Interfax. In the report, the Russian defence ministry stated that weapons were allegedly destroyed in the Ternopil region.

On Saturday (June 11), Reuters reported that the Russian defence ministry said in a statement that its air defence forces had shot down three Ukrainian warplanes.

As per the ministry, the Russian military shot down two MIG-29 planes in the Mikolayiv region and one Su-25 fighter jet in the Kharkiv region.

In the aftermath of Russia's invasion of Ukraine, the United States and other Western allies have supplied aid to Ukraine and provided the war-torn nation with weapons to counter Russia.

But Russia has constantly criticised the West for doing so, blaming the NATO nation to aggravate the crisis. Recently, Russian President Vladimir Putin warned the United States saying that Russia would strike new targets if the West supplied longer-range missiles to Ukraine for use in high-precision mobile rocket systems.

Meanwhile, the latest reports state that at least 22 people were wounded when Russia struck the western Ukrainian town of Chortkiv, the regional governor said on Sunday (June 12).

The strike was a rare attack in the west of the country. "Yesterday at 19:46 (1645 GMT) Chortkiv was hit by four missiles, all fired from the Black Sea," Volodymyr Trush said in a Facebook post.

Unlike eastern and southern Ukraine, which have borne the brunt of Russian firepower and the west of the country has only seen sporadic attacks.