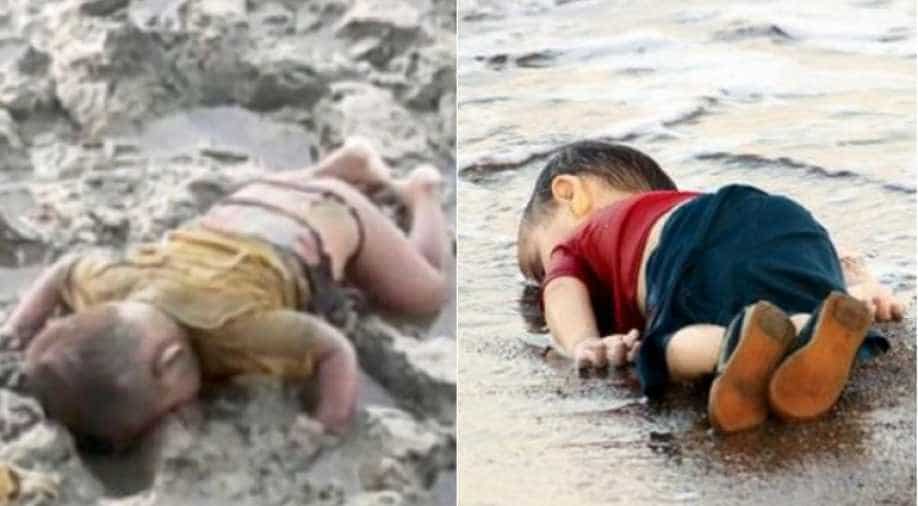 A tragic picture circulated today of a 16-month-old Rohingyan boy named Mohammed Shohayet, who was killed as Burmese guards fired on refugees fleeing a genocide. The image recalls for many the heart-wrenching picture of Alan Kurdi, the dead Syrian refugee whose corpse washed up on Turkey's shore.

The impossibly sad picture of Kurdi reverberated around the world in the summer of 2016. It seemed to embody the epitome of the horror of war, and increased an already fierce public backlash against the Syrian civil war.

Shohayet's family fled to Bangladesh to escape the violence in Myanmar's Rakhine State. Mohammed, along with his mother, uncle and three-year-old brother drowned on the journey, leaving only the father alive, CNN reported.

"When I see the picture, I feel like I would rather die. There is no point in me living in this world," Mohammed's father, Zafor Alam, told CNN.

Whereas the picture of the Syrian boy, Kurdi, seemed to make people feel agonizingly helpless in the face of a catastrophe the world was closely watching, many hope that the picture of Shohayet will increase attention to the plight of the Rohingya Muslims.

Myanmar is carrying out "ethnic cleansing" of Rohingya Muslims, a UN official has reportedly said, as horrifying stories of gang rape, torture and murder emerge from among the thousands who have fled to Bangladesh.

Up to 30,000 of the impoverished ethnic group have abandoned their homes in Myanmar to escape the unfolding violence, the UN says, after troops poured into the narrow strip where they live earlier this month.

Dhaka has resisted urgent international appeals to open its border to avert a humanitarian crisis, instead telling Myanmar it must do more to prevent the stateless Rohingya minority from entering.

The Muslim minorities in Myanmar continue to flee the violence by security forces. Myanmar is accused of carrying out a systematic cleansing of the minority group also known as Rohingya. WION's Bangladesh correspondent Saad Hammadi sends this report. (WION)