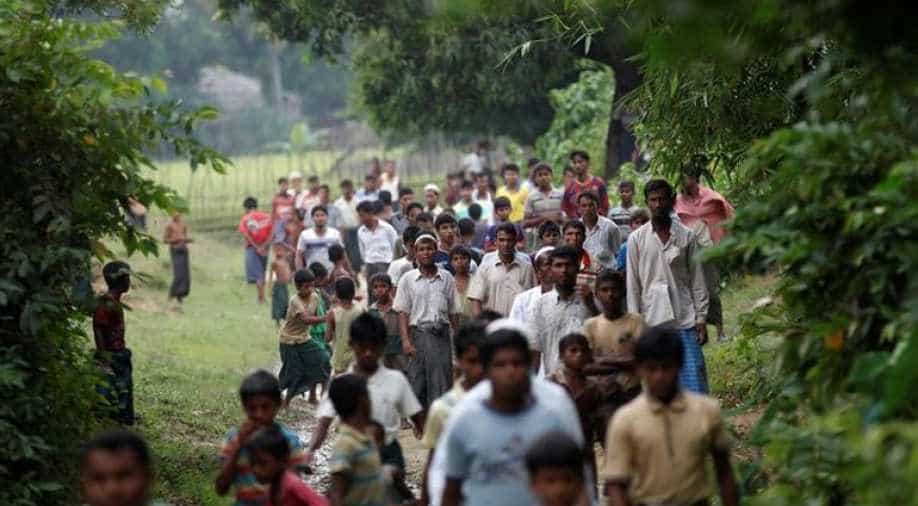 Up to 30,000 Rohingya have abandoned their homes in Myanmar to escape the unfolding violence, the UN says, after troops poured into the narrow strip where they live earlier this month. Photograph:( Reuters )

Myanmar is carrying out "ethnic cleansing" of Rohingya Muslims, a UN official has reportedly said, as horrifying stories of gang rape, torture and murder emerge from among the thousands who have fled to Bangladesh.

Up to 30,000 of the impoverished ethnic group have abandoned their homes in Myanmar to escape the unfolding violence, the UN says, after troops poured into the narrow strip where they live earlier this month.

Dhaka has resisted urgent international appeals to open its border to avert a humanitarian crisis, instead telling Myanmar it must do more to prevent the stateless Rohingya minority from entering

John McKissick, head of the United Nations refugee agency (UNHCR) in the Bangladeshi border town of Cox's Bazar, told the BBC that troops were "killing men, shooting them, slaughtering children, raping women, burning and looting houses, forcing these people to cross the river" into Bangladesh.

Dhaka has resisted urgent international appeals to open its border to avert a humanitarian crisis, instead telling Myanmar it must do more to prevent the stateless Rohingya minority from entering.

"It's very difficult for the Bangladeshi government to say the border is open because this would further encourage the government of Myanmar to continue the atrocities and push them out until they have achieved their ultimate goal of ethnic cleansing of the Muslim minority in Myanmar," McKissick said.

A spokesman for Myanmar President Htin Kyaw slammed the comments.

''I would like to question the professionalism and ethics which should be followed and respected by UN staff. He should speak based on concrete and true facts, he shouldn't make accusations," Zaw Htay told AFP.

It's not the first time such claims have been made against Myanmar.

In April 2013 Human Rights Watch said it was conducting a campaign of ethnic cleansing against the Rohingya - an accusation rejected by then president Thein Sein as a "smear campaign".

'They shot my wife'

But the scale of human suffering was becoming clear on Thursday, as desperate people like Mohammad Ayaz told how troops attacked his village and killed his pregnant wife.

Cradling his two-year-old son, he said troops killed at least 300 men in the village market and gang-raped dozens of women before setting fire to around 300 houses, Muslim-owned shops and the mosque where he served as imam.

"They shot dead my wife, Jannatun Naim. She was 25 and seven months pregnant. I took refuge at a canal with my two-year-old son, who was hit by a rifle butt," Ayaz told AFP.

Ayaz sold his watch and shoes to pay for the journey and has taken shelter at a camp for unregistered Rohingya refugees.

Many of those seeking shelter say they walked for days and used rickety boats to cross into Bangladesh, where hundreds of thousands of registered Rohingya refugees have been living for decades.

The Rohingya are loathed by many in Buddhist-majority Myanmar who see them as illegal immigrants and call them "Bengali", even though many have lived there for generations.

Most live in impoverished western Rakhine state, but are denied citizenship and smothered by restrictions on movement and work.

As the crisis deepened, Bangladesh said Wednesday it had summoned Myanmar's ambassador to express "deep concern".

"Despite our border guards' sincere effort to prevent the influx, thousands of distressed Myanmar citizens including women, children and elderly people continue to cross (the) border into Bangladesh," it said.

"Thousands more have been reported to be gathering at the border crossing."

Since the latest violence flared up, Bangladesh border guards have intensified patrols and coast guards have deployed extra ships. Officials say they have stopped around a thousand Rohingya at the border since Monday.

Farmer Deen Mohammad was among the thousands who evaded the patrols, sneaking into the Bangladeshi border town of Teknaf four days ago with his wife, two of their children and three other families.

"They (Myanmar's military) took my two boys, aged nine and 12 when they entered my village. I don't know what happened to them," Mohammad, 50, told AFP.

"They took women in rooms and then locked them from inside. Up to 50 women and girls of our village were tortured and raped."

Mohammad said houses in his village were burned, echoing similar testimony from other recent arrivals.

Human Rights Watch said this week it had identified more than 1,000 houses in Rohingya villages that had been razed in northwestern Myanmar using satellite images.

Myanmar's military has denied burning villages and even blamed the Rohingya themselves.

Rohingya community leaders said hundreds of families had taken shelter in camps in the border towns of Teknaf and Ukhia, many hiding for fear they would be sent back to Myanmar.

Police on Wednesday detained 70 Rohingya, including women and children, who they say will be sent back across the border.

"They handcuffed even young girls and children and then took them away with a view to pushing them back to Myanmar," said one community leader who asked not to be named, adding they faced "certain death" if made to return.