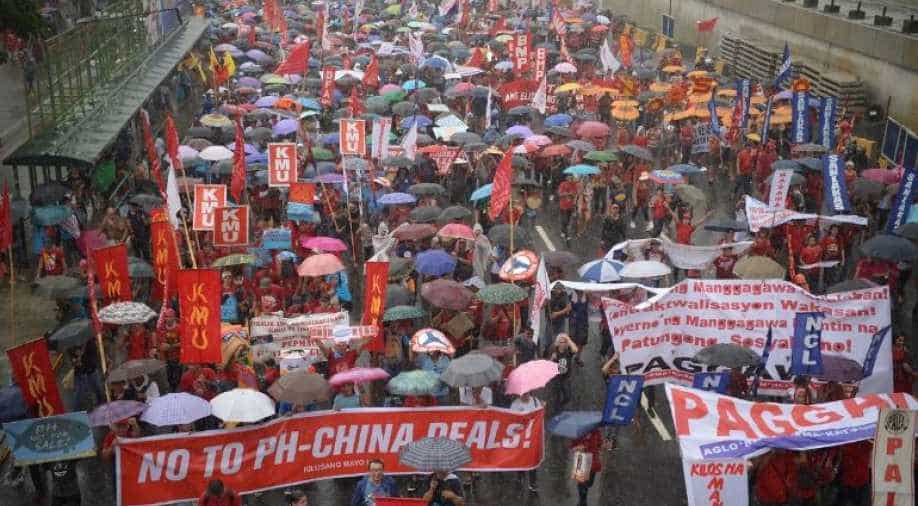 Thousands of protesters in the streets of Manila. Photograph:( AFP )

Some 3,000 protesters took to the streets to condemn the government over its stance towards China and deadly war on drugs.

Thousands protested in the streets of Manila on July 22 as President Rodrigo Duterte launched a spirited defence of his relationship with China. Duterte insisted that his refusal to challenge China's maritime assertiveness was not capitulation, but avoidance of conflict.

In one and half hour speech to Congress that frequently went off script, Duterte devoted part of his annual state of the nation address to arguing that it was senseless to confront a country with claims to the same waters, and a far superior military.

Some 3,000 protesters took to the streets to condemn the government over its stance towards China and deadly war on drugs.

Protesters burned a serpent-shaped effigy of Duterte decorated with a Chinese flag and gun.

Duterte has been heavily scrutinised for his ties to China. Critics have accused him of gambling with national sovereignty in pursuit of massive investments that have not yet materialised.

The Philippine leader made a few references to his signature war on drugs, despite a July 11 decision by the UN Human Rights Council to investigate the thousands of deaths and allegations of summary killings by police.

Critics say Duterte's frequent threats and talk of bloodshed have emboldened police to kill drug users and peddlers with impunity.

The president also joked about a preliminary examination of the drugs crackdown by the International Criminal Court (ICC), saying he might agree to go on trial with a few conditions that included an air-conditioned cell and "unlimited conjugal visits".