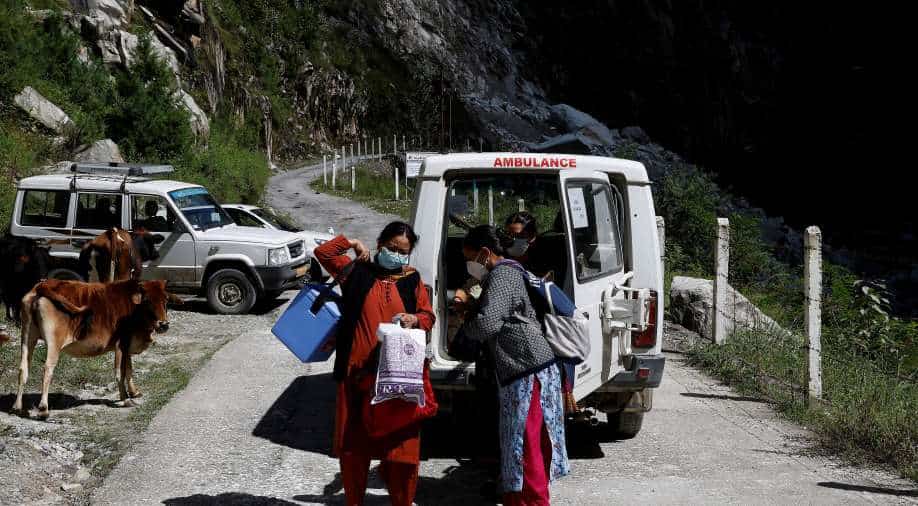 Health workers carry medical kits and a box containing COVISHIELD vaccines, before starting their trek through the mountains to vaccinate people Photograph:( Reuters )

While wealthy nations are offering people third vaccine doses and increasingly inoculating children, poor countries have administered an estimated 4 doses per 100 people, according to the WHO

From the opening moments of the Group of 20 summit Saturday, the leaders of the world’s largest economies wanted to send a strong message about ending the coronavirus pandemic: During an unconventional group photograph, they were joined on the dais by doctors in white coats and first responders from the Italian Red Cross.

In his remarks opening the meeting — the first gathering in person for the group since the pandemic struck — Italian Prime Minister Mario Draghi pointed to the stark disparity in access to vaccines between richer and poorer countries.

“Going it alone is simply not an option,” said Draghi, whose country is hosting the summit. Now, he added, the world could “finally look at the future with great — or with some — optimism.”

But as the leaders gathered to discuss plans to protect against future pandemics, health experts and activists expressed concerns that the world’s richest nations were still not doing enough to help people in poor nations survive the current one.

Advisers said US President Joe Biden, who has promised to make the United States an “arsenal of vaccines,” would not announce concrete plans related to closing the gap between rich and poor nations on vaccination rates. A senior administration official said Biden had met with a group of leaders early in the day and pushed them to support debt relief and allow more emergency financing to reach poor countries whose economies have been battered by the pandemic.

While wealthy nations are offering people third vaccine doses and increasingly inoculating children, poor countries have administered an estimated 4 doses per 100 people, according to the World Health Organization.

Only about 300 million of those doses are expected to be shipped this year, a number that experts say falls short of the amount needed for meaningful protection against the virus.

But Biden’s advisers said he came into the summit focused on a host of problems, including fixing global supply chains, urging investments to curb climate change, and meeting with the leaders of France, Britain and Germany to discuss ways to return to a 2015 nuclear accord with Iran that the Trump administration scuttled.