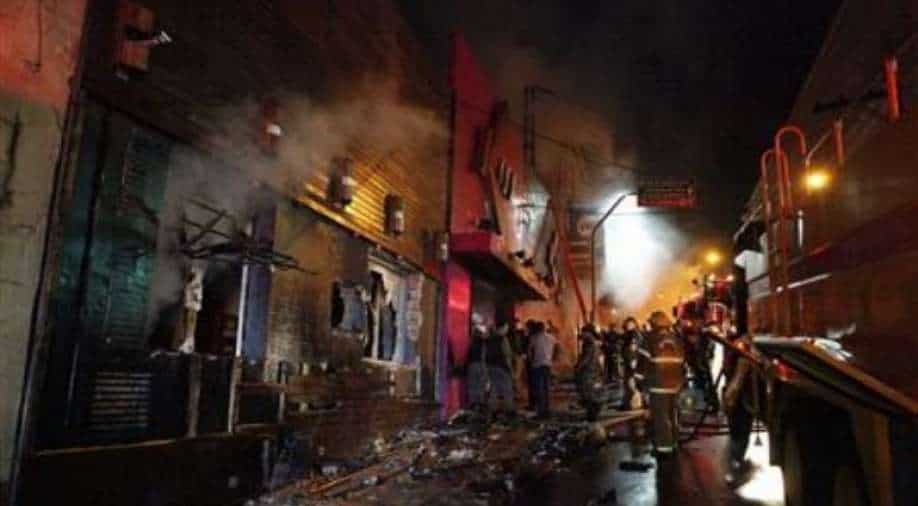 Kiss nightclub in Brazil was caught on fire in January 2013 and killed 242 people Photograph:( Reuters )

An investigation into the matter revealed that the venue had no functioning fire extinguishers, very poor signage of emergency evacuations and only two doors from which people could escape the extremely crowded dance floor

Four people have been convicted in Brazil for playing a role in the nightclub fire that took lives of more than 240 people who were present there to attend a concert and have the time of their life.

A nightclub in the southern town of Santa Maria, Kiss night club, was hosting Gurizada Fandangueira band in 2013 when a fire broke out and took lives of 242 people.

The fire broke out when two members of the band had lit flares as a sign of celebration. These flares set fire to the ceiling, which then kept progressing throughout the nightclub and burnt down the building.

An investigation into the matter revealed that the venue had no functioning fire extinguishers, very poor signage of emergency evacuations and only two doors from which people could escape the extremely crowded dance floor.

The verdict was announced almost a decade by Judge Orlando Faccini. The trial went on for ten days during which survivors from the tragic fire and the family members of the deceased victims narrated their stories and painful aftermath.

"The last time I ran, it was to save myself from death," said Kelen Giovana Leite Ferreira, a survivor of the tragedy who had a part of her right leg amputated.

After the trial, the judge ruled that the venue organisers had failed to take proper safety measures. Club co-owners Elissandro Callegaro Spohr, 38, and Mauro Londero Hoffmann, 56, received 22.5 and 19.5 years respectively.

"The defendants' culpability is high... this much life was not taken away by chance," the judge said and charged the club owners and two members of the band for guilty of murder and attempted murder of the victims.

Band members Luciano Bonilha Leao, 44, and Marcelo de Jesus dos Santos, 41, have been sentenced to 18 years behind the bars.