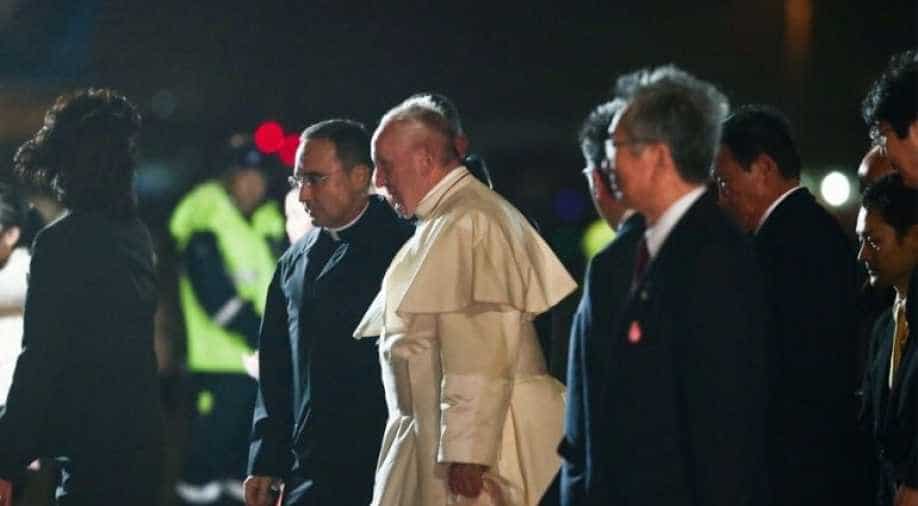 The 82-year-old Argentine is fulfilling a long-cherished ambition to preach in Japan, where years ago he hoped to be a missionary.

Pope Francis arrived in Japan on Saturday, where he is expected to deliver a robust anti-nuclear message of peace in the only country to have suffered an atomic bomb attack.

The 82-year-old Argentine is fulfilling a long-cherished ambition to preach in Japan, where years ago he hoped to be a missionary.

He arrived in Tokyo in heavy rain and high winds, the white cape of his papal outfit blowing up around his face as he stepped gingerly down the staircase from the Thai Airways plane that carried him from the first stop of his tour in Thailand.

His four-day trip will begin with visits to Nagasaki and Hiroshima, cities forever associated with the nuclear bombs dropped on them at the end of World War II, killing at least 74,000 people and 140,000 people respectively.

In a video message to the Japanese people before he left the Vatican, Francis railed against the "immoral" use of nuclear weapons.

"Together with you, I pray that the destructive power of nuclear weapons will never be unleashed again in human history," said the head of the world's 1.3 billion Catholics.

Francis arrives from Thailand, where he preached a message of religious tolerance and peace.

He is expected to do the same in Japan, a country with only approximately 440,000 Catholics out of a population of 126 million.

The majority of Japanese practise a mixture of Shinto and Buddhism, two closely intertwined faiths based on the worship of nature and spirits, but many in Japan also observe Christian festivals such as Christmas.

Christians endured centuries of bloody repression in Japan after the religion was introduced to the country by a Spanish Jesuit priest in 1549.

In the 17th century, Japan was closed to the outside world and Christians were persecuted, tortured, crucified and drowned as they were forced to recant their faith.

When Japan reopened to the world in the mid-19th century and the missionaries returned, they were astonished to find an estimated 60,000 who had secretly kept the faith alive and followed a unique version of Catholicism blended with Japanese culture and religious rites.

Francis is expected to pay tribute to these so-called "hidden Christians", or "kakure kirishitan" in Japanese, during his trip on Sunday to Nagasaki, where they were discovered.

Francis will also visit Hiroshima and deliver remarks at the world-famous peace memorial that marks the day on August 6, 1945 when the atomic bomb was dropped.

Father Yoshio Kajiyama, director of the Jesuit social centre in Tokyo, was born in Hiroshima shortly after the war and is eagerly awaiting the pope's anti-nuclear speech.

"My grandfather died the day of the bomb in Hiroshima, I never knew him. Four days later my aunt died when she was 15 years old," said the 64-year-old.

"If you grow up in Hiroshima, you can't forget the bomb."

In Tokyo on Monday, Francis will met victims of the "triple disaster", the earthquake, tsunami and nuclear meltdown in 2011 that devastated large swathes of north-eastern Japan.

His trip will also include meetings with the new Emperor Naruhito and Japanese Prime Minister Shinzo Abe, as well as delivering a mass in a Tokyo baseball stadium.

On the first leg of his latest Asian tour, Francis spent three nights in Buddhist-majority Thailand, another country where just a sliver of the population is Catholic.

He met with Thai King Vajiralongkorn and also sat down with the Buddhist Supreme Patriarch, the head of Thailand's Buddhists, readily taking off his shoes during the visit to adhere to local customs.

His cousin Sister Ana Rosa, who has worked as a missionary in Thailand since 1966, was a near constant presence by his side during the visit, serving as his interpreter.

In his final public address in Bangkok, the pontiff expressed gratitude to the small Catholic community for the warm welcome he received.

"I am leaving you with a task: do not forget to pray for me!"