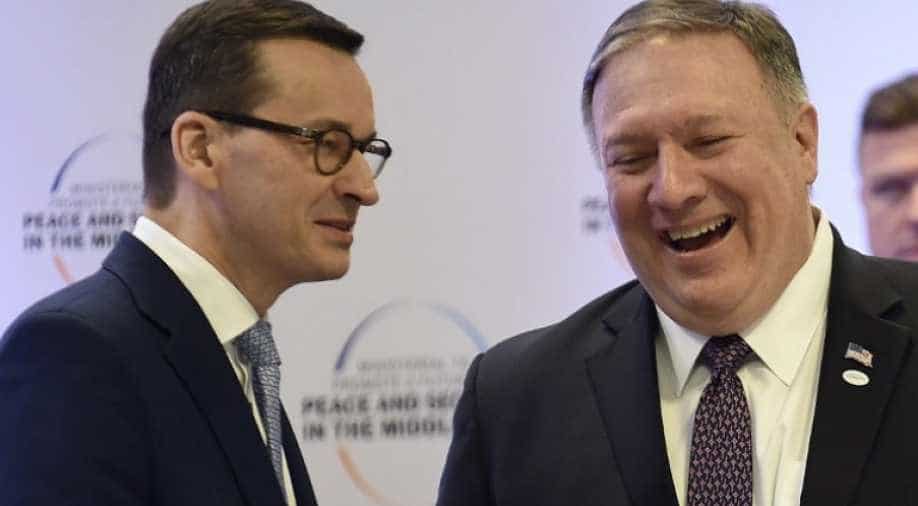 Poland's Prime Minister Mateusz Morawiecki (L) and US Secretary of State Mike Pompeo share a smile as they attend the conference on Peace and Security in the Middle east in Warsaw. Photograph:( AFP )

US Secretary of State Mike Pompeo, who visited Poland last week, called on Warsaw to move forward with legislation to help 'those who lost property during the Holocaust era'.

Prime Minister Mateusz Morawiecki insisted Sunday that the question of Polish compensation for Jewish assets stolen by the Nazi was "definitively resolved", rebuffing a US call for further action.

US Secretary of State Mike Pompeo, who visited Poland last week, called on Warsaw to move forward with legislation to help "those who lost property during the Holocaust era".

But Morawiecki told the PAP news agency Sunday: "The question of restitution of assets to US citizens of Jewish origin has been definitively resolved.

"A law of compensation, signed with the United States settles the question, and frees Poland from these responsibilities," he said. The compensation law to which he was referring was passed in 1960.

"I want to underline that: This subject does not exist," he added.

The claims for compensation were based on a fundamental misunderstanding, he said. "Poland was the victim and not the executioner," he argued.

And Germany had never compensated Poland "for losses inflicted by the Third Reich's criminal policies", he added.

Morawiecki estimated Poland's losses at around $700 billion, and the government has not ruled out presenting Berlin with a request for payment.

Since the fall of communism in 1989, Poland has never managed to completely draw a line under the restitution question. Several bills drafted to deal with the issue failed to win the approval of lawmakers.

In Washington meanwhile, a new US law aimed at helping Holocaust survivors and families obtain compensation awaits signing by US President Donald Trump.